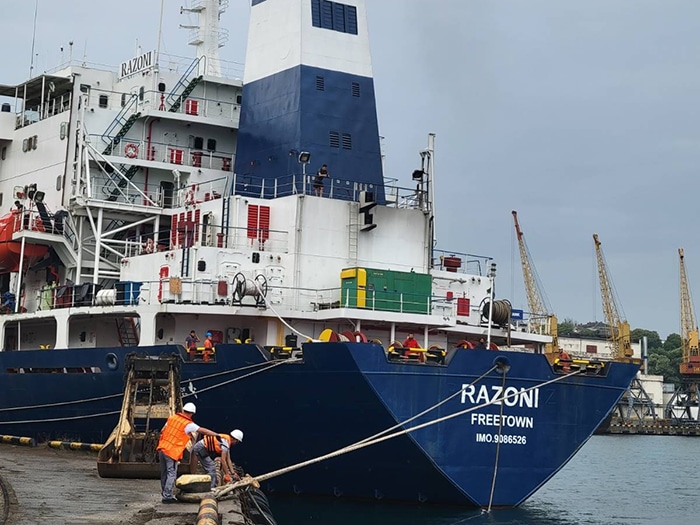 Oleksandr Kubrakov, Minister of Infrastructure of Ukraine, today confirmed that the first ship to leave Ukraine with a cargo of grain since the Russian invasion, the M/V Razoni, had departed Odesa today. Reportedly, another 17 vessels with nearly 600,000 tonnes of grain are waiting their turn. Some 20 million tonnes of grain have been stuck in Ukrainian ports due to the war.

According to BIMCO, the three ports now being readied to resume operations accounted for 65% of Ukraine’s total grain exports over the past five years.

“With this deal, the UN hopes to increase monthly grain exports from Ukraine by five million tonnes. However, since over the past five years, these three ports have not ever handled such a high amount of grain, meeting this target could prove to be a challenge,” said Niels Rasmussen, Chief Shipping Analyst at BIMCO, recently. “Even if port logistics accelerate to expedite exports, the need to escort ships in and out of the ports is likely to cause some congestion.”

The first ship, the M/V Razoni, is a 1996-built, 29,992 dwt , Sierra Leone flagged bulk carrier. It left port following authorization by the Joint Coordination Center (JCC) in Istanbul set up under the UN sponsored deal brokered by Turkey.

How many ships will follow the Razoni means to be seen. The deal is widely viewed as precarious. Today, the Romanian Navy deactivated a sea mine in the Black Sea in a reminder of one threat to shipping in the region. The other, of course, is the Russian Black Sea Fleet and Russian missile attacks on Ukrainian ports.

Russian missiles struck the port city of Mykolaiv, Sunday. Ukrainian grain tycoon Oleksiy Vadatursky, founder and owner of agriculture company Nibulon, and his wife were killed in their home. Ukrainian President Volodymyr Zelenskiy called Vadatursky’s death as “a great loss for all of Ukraine” and said the grain magnate had been building a modern grain market with a network of transhipment terminals and elevators.

Nibulon has played a major role in building up Ukraine’s inland waterways routes operating its own shipyards and inland river vessels.

Vadatursky’s death is believed by many to have been a targeted assassination aimed at damaging the Ukrainian grain industry.