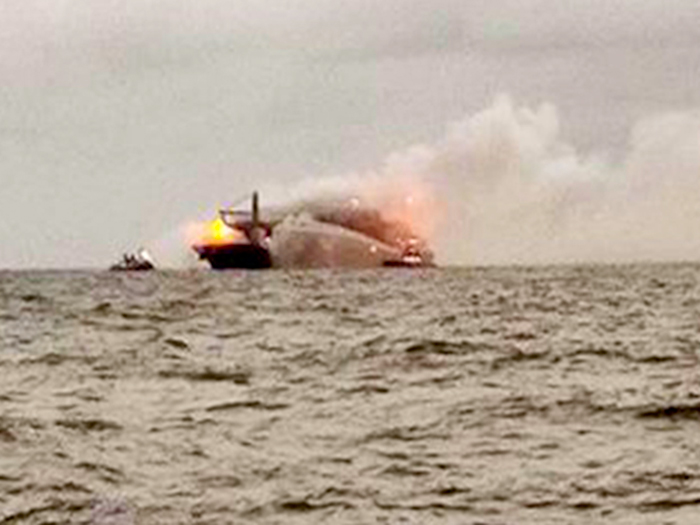 Dramatic footage released by the Sri Lanka air force yesterday shows flames and smoke continuing to erupt from a virtually brand new 2,700 TEU containership despite firefighting efforts that have been continuing for days.

The Sri Lanka Ports Authority (SLPA) say that the X-Press Pearl container ship that was sailing from India to Singapore via Colombo and was was at anchor, some 9 nautical miles outside the port of Colombo, where it had been waiting for a berth when, fire broke out in a box in the deck stacks.

The fire was brought under control by the following morning, but it broke out again. The fire is believed to have been caused by a reaction to chemicals in the containers. According to the SLPA, the feeder vessel had departed Hazira, India, on May 15 carrying 1,486 containers with 25 tons of nitric acid, several other chemicals and cosmetics from the port of Hazira, India.

“X-Press Feeders, disponent owners / operators and managers of the container ship ‘X-Press Pearl’ (IMO: 9875343), report that all crew members were safely evacuated today from the vessel, after the fire incident on board the vessel.

“Despite the best efforts of salvors and firefighting tugs, the blaze had spread overnight, fanned by strong winds. With the crew’s safety of utmost importance to X-Press Feeders, the decision was made to evacuate them.

“X-Press Feeders will continue to work closely with the Sri Lankan authorities and emergency services with assistance from its appointed salvors to extinguish the blaze and to save the vessel and its cargo. Specialized firefighting equipment which arrived from Europe last night will join the salvaging operations.

“The families of all the crew members have been advised of the safe evacuation of the respective crew, and we will continue to update them of any further developments. X-Press Feeders will continue to liaise with customers with regard to their containers on board the vessel.”