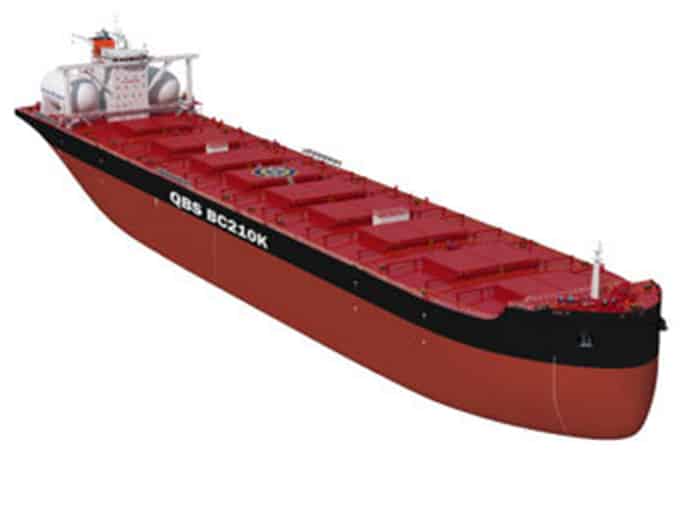 Japan’s Mitsui O.S.K. Lines, Ltd. (MOL) is, quite literally going big on LNG as a marine fuel. It has signed contracts for the construction of four Capesize bulkers and two Very Large Crude Carriers (VLCCs) that will all use liquefied natural gas (LNG) as their main fuel.

The VLCC contract is also significant in that it appears to be the first VLCC order of any kind placed by anyone since June 2021. According to Poten & Partners, the last VLCC that
was ordered 14 months ago cost $93 million. Poten assesses the current contract price for that vessel would be $119 million. Add in a premium for LNG fueling, and it’s clear that the MOL order represents a significant financial commitment.

Though it is not disclosing what it’s paying for any of the six ships, MOL says its order for construction of the four 210,000 DWT-class Capesize bulkers has been placed with China’s CSSC Qingdao Beihai Shipbuilding Co. This is MOL’s first newbuilding order with the shipyard. The new ships are slated for delivery in succession from 2025 through 2026.

MOL’s contract for the construction of the two 309,000 DWT-class VLCCs was placed with Kawasaki Heavy Industries, They will be built at the Dalian COSCO KHI Ship Engineering shipyard in China.

The vessels, which will are the first LNG-fueled VLCCs to be ordered by a Japanese shipping company, are scheduled for delivery from 2025 through 2026.

The MOL Group aims to achieve net zero greenhouse gas (GHG) emissions by 2050. It plans to expand its fleet of LNG-fueled vessels to about 90 by 2030.

Compared to conventional marine fuel oil, LNG is expected to reduce emissions of carbon dioxide (CO2) by about 25%-30% and other GHG emissions. MOL says it has advanced its adoption of LNG-fueled vessels as a “currently feasible initiative” on reducing GHG emissions. LNG can be substituted with a view to shifting toward synthetic methane produced using renewable energy sources, which can significantly reduce GHG emissions.

MOL Group has now ordered 16 ocean-going LNG-fueled vessels which includes these latest Capesize bulkers and VLCCs, in addition to car carriers, bulkers, and six coastal vessels which are ferries, tugboat, and coastal cargo vessel. It will further continue to widen the use of LNG fuel as an initiative that it can take now, to accelerate toward the complete elimination of GHG emissions.