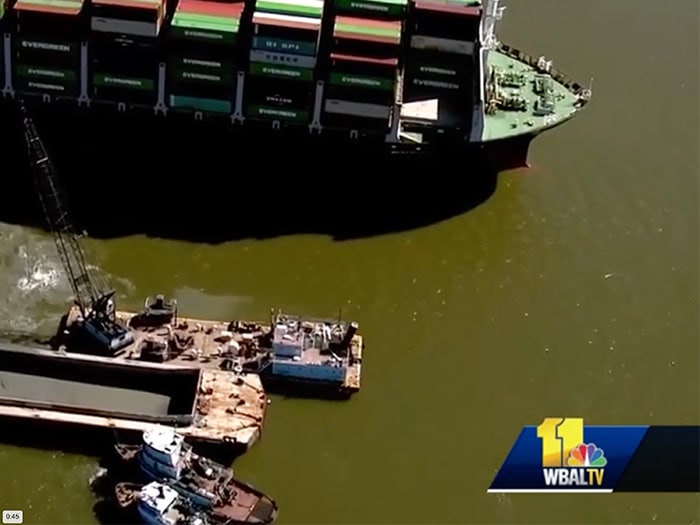 Although the 1,095 foot long, 12,118 TEU Evergreen Marine containership Ever Forward remains grounded in Chesapeake Bay, salvor Donjon Smit began efforts to free the vessel Sunday. That was one week after the ship originally ran aground.

According to cargo claims consultancy W.K. Webster, the plan to reflect the Ever Forward is understood to involve releasing ballast to lighten the vessel and dredging the sea bottom around it before attempting to refloat the vessel at high tide using the vessel’s main engine and tug assistance.

“It has to succeed, and I believe it will succeed. We’ll get that ship off and running sometime in the near future,” Doyle said.

Doyle, a former FMC Commissioner, was executive director and CEO of trade association Dredging Contractors of America prior to taking his present position.

He said the Ever Forward dredging work is a 24-hour a day operation.

“We have two dredges there and several barges that will carry the dredge material. One of the dredges is the largest clamshell dredge in the Western Hemisphere,” he said.

He also said that the operation was more challenging than the freeing of that other notorious grounded Evergreen Marine ship Ever Given as the Ever Forward is deeply embedded in mud.

Bearing out predictions that the freeing of the giant containership would be protracted, Doyle told the TV station: “It’s a surgical operation, this type of dredging with a ship embedded … and we hope that things will turn out pretty good in the next couple of weeks.”