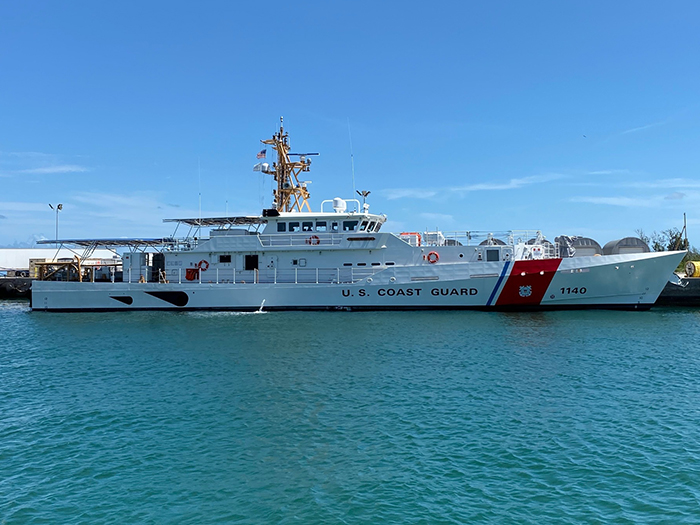 Delivered earlier this year by Bollinger Shipyards, the USCGC Oliver Henry is the second of three FRCs to be home-ported in Apra Harbor, Guam, in support of Operation Aiga, which is an effort to strengthen island nations in Oceania, including through fishery patrols and enforcement.

“The People’s Republic of China’s illegal, unreported, and unregulated fishing, and harassment of vessels operating in the exclusive economic zones of other countries in the Indo-Pacific, threatens our sovereignty, as well as the sovereignty of our Pacific neighbors and endangers regional stability. Efforts of the United States Government, including the United States Coast Guard (USCG) are critical to countering these destabilizing and malign actions,” he said in a statement released by the White House.

“In an effort to bolster our capacity and presence in the Indo-Pacific region, in Fiscal Year 2021, the USCG plans to evaluate the feasibility of basing Fast Response Cutters in American Samoa,” noted the statement. “If the survey is favorable, the United States could further expand its presence in the South Pacific.”

“As the Coast Guard continues to evolve to meet the most pressing maritime and national security threats of the day—be it IUU fishing, piracy, drug or human trafficking—a larger fleet and expanded presence of American-made white hulls with red racing stripes around the globe will help further the regional partnerships and alliances necessary to curb the creeping influence of America’s strategic competitors and adversaries and reaffirm its continued leadership and commitment to rules-based order and maritime governance around the world,” said Ben Bordelon, president and CEO of Bollinger Shipyards and chairman of the Shipbuilders Council of America. “Should the proposed feasibility study demonstrate a need for additional FRCs, Bollinger Shipyards and the maritime defense industrial base stand ready to construct and deliver the high-quality and high-endurance vessels necessary to carry out and perform the mission at hand.”

Earlier this year, Bollinger Shipyards delivered the USCGC Oliver Henry to the U.S. Coast Guard. It is the second of three FRCs to be home-ported in Apra Harbor, Guam, in support of Operation Aiga, which is an effort to strengthen island nations in Oceania, including through fishery patrols and enforcement.

Commandant of the Coast Guard Adm. Karl Schultz has acknowledged the importance of the Guam homeporting, saying, “by placing an ocean-going Coast Guard buoy tender and FRCs, we will promote ‘rules-based order,’ build capacity and affirm the United States’ positive and enduring role in the region.”