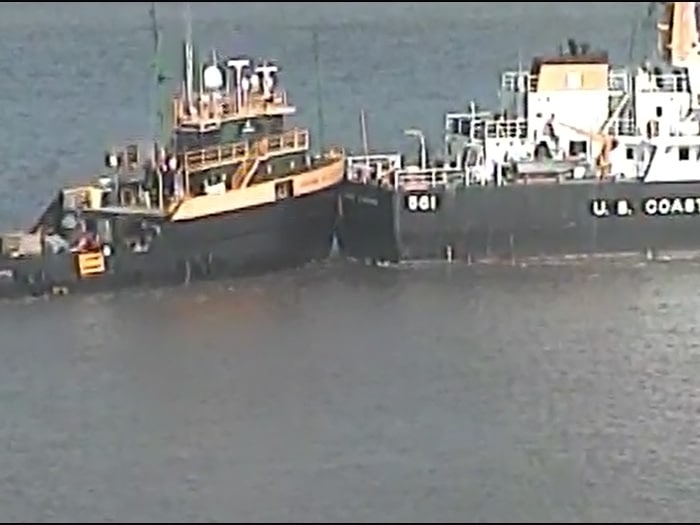 Screenshot of vessel traffic service camera at 1544, at the time of collision.​ [Source: NTSB/​​US Coast Guard​​]

The National Transportation Safety Board (NTSB) has issued its report into an October 11, 2020, incident in which an offshore supply vessel (OSV) twice collided with a U.S. Coast Guard cutter.

The first collision occurred near Texas Point, Texas, when the OSV Cheramie Bo-Truc No. 33 collided with the Harry Claiborne, a 175-foot coastal buoy tender, when traveling outboard for sea in the Sabine Pass.

The OSV subsequently ran aground. The crew attempted to refloat the vessel, and as it broke free, the current set it into the stationary cutter, resulting in a second collision.

Two days prior to the collision, Hurricane Delta had impacted the area and caused several buoys in Sabine Pass to move from their assigned locations.

At the time of the collision, the Harry Claiborne was servicing buoys impacted by the hurricane.

The captain of the Cheramie Bo-Truc No. 33 called the Harry Claiborne by VHF radio requesting to overtake the cutter on the cutter’s starboard side.

The captain told NTSB investigators that he “didn’t realize that the buoy was on location” and thereby assumed the cutter was servicing a buoy that had moved into the channel. As the Cheramie Bo-Truc No. 33 was attempting to overtake the cutter, the depth sounder quickly dropped, and the captain aborted his attempt to pass in an effort to avoid running aground.

Despite the captain’s efforts, the Cheramie Bo-Truc No. 33 collided with the cutter. Two crewmembers on the Harry Claiborne sustained minor injuries. The OSV then grounded in the mud alongside the channel.

The OSV crew worked for 45 minutes to get the vessel out of the mud. As they attempted to maneuver around the cutter’s stern, the Cheramie Bo-Truc No. 33’s starboard bow struck the Harry Claiborne’s starboard quarter. A Coast Guard crewmember sustained minor injuries.

The NTSB determined the probable cause of the initial collision was the offshore supply vessel captain’s assumption of the stationary cutter’s position, which led to his decision to pass the vessel outside the channel, resulting in a late maneuver toward the Harry Claiborne to avoid running aground. Contributing to the collision was the cutter crew’s not questioning the passing arrangement proposed by the OSV captain.

Causing a second collision was the lack of coordination and communication between the two vessel operators when the Cheramie Bo‑Truc No. 33 crew refloated their vessel.