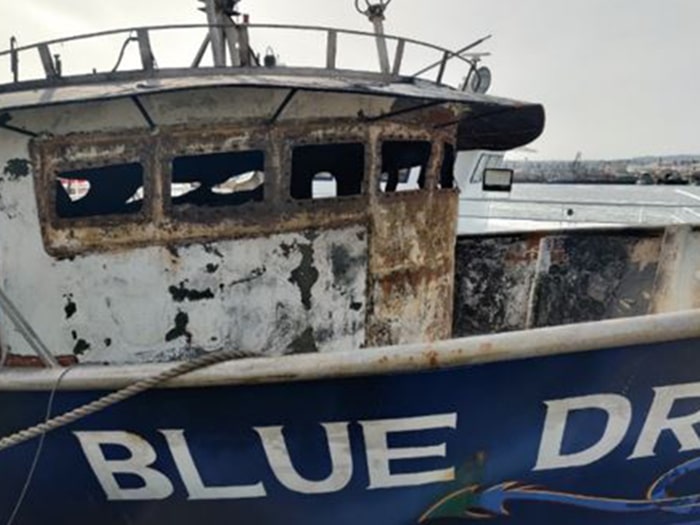 The National Transportation Safety Board (NTSB) has released a report on its investigation of a November 10, 2021, fire aboard the 85 foot long fishing vessel Blue Dragon. No injuries or fatalities were reported, but the fire resulted in more than $500,000 in damages to the vessel.

The 1990-built Blue Dragon was under way conducting longline fishing operations in the North Pacific Ocean when it caught fire. The six crewmembers and a National Marine Fisheries Service (NMFS) observer unsuccessfully attempted to fight the fire. They abandoned the vessel and were rescued by a Good Samaritan vessel. The Blue Dragon was later towed to San Pedro, Calif.

On October 25, 2021, the Blue Dragon left Honolulu, Hawaii, to fish for swordfish and tuna. On November 9, while the crew were preparing to retrieve fishing gear, the NMFS observer discovered a fire in the wheelhouse under the console. While the crew was attempting to fight the fire, the NMFS observer and a deckhand retrieved the 10-person life raft and the vessel’s Global Navigation Satellite System-enabled emergency position indicating radio beacon (EPIRB) from above the wheelhouse. The NMFS observer used his satellite emergency notification device (SEND) to send an SOS along with a text that said “fire.”

He also manually activated the vessel’s EPIRB and his personal locator beacon.

NTSB concluded that the observer and deckhand contributed to the survival of the crew by retrieving the EPIRB and life raft before they caught fire. The observer’s activation of the vessel’s EPIRB and use of his NMFS-issued personal emergency communications equipment further contributed to the crew’s timely rescue, since the equipment transmitted the crew’s location.

The NTSB determined the probable cause of the fire aboard the Blue Dragon was from an unknown source, likely electrical in nature, which ignited the wooden wheelhouse console. Contributing to the extent of the fire damage was the substantial use of combustible materials in the joinery, outfitting, and furnishings in the wheelhouse and accommodation spaces.

NTSB issued a safety recommendation to the U.S. Coast Guard to require the use of personal locator beacons to enhance chances of survival following the sinking of the cargo vessel El Faro in 2015. All 33 crewmembers perished in the sinking. NTSB reiterated the recommendation after the fishing vessel Scandies Rose sank off Sutwik Island, Alaska in 2019.

Two of the vessel’s crewmembers were rescued; the other five crewmembers were never found. NTSB concluded that personal locator beacons would aid in search and rescue operations by providing continuously updated and correct coordinates of crewmembers’ locations. The recommendation remains open.

Improving fishing vessel safety remains a priority for the NTSB and it is an issue on the NTSB’s 2021-2022 Most Wanted List of Transportation Safety Improvements. The NTSB advocates for new standards to address—and periodically reassess—intact stability, subdivision, and watertight integrity in commercial fishing vessels up to 79 feet long as well as personal locator beacons for crew.