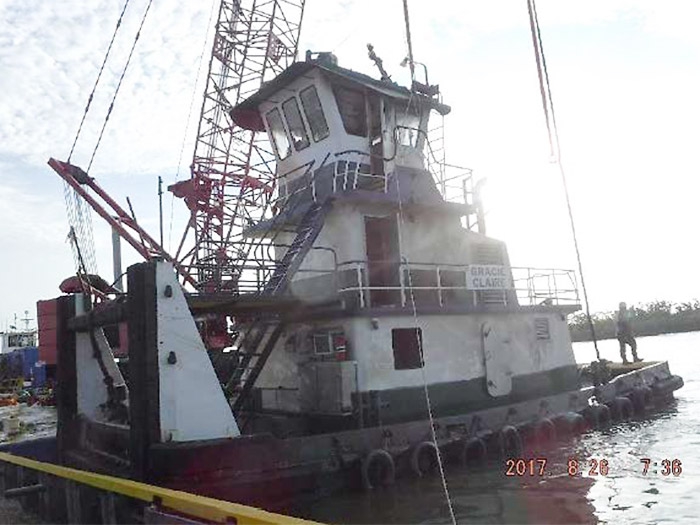 AUGUST 31, 2018 — The National Transportation Safety Board has issued its report on the August 23, 2017, sinking of the 1977-built Triple S Marine LLC towing vessel Gracie Claire while moored in Tiger Pass near mile marker 10 on the Lower Mississippi River in Venice, LA.

While taking on fuel and water, the towboat began to slowly list to starboard. After the wake of a passing crewboat washed onto the Gracie Claire’s stern, the list increased. In a short period of time, water entered an open door to the engine room and flooded the space. The towboat sank partially, its bow being held above the water by the lines connected to the dock.

All three crew members escaped to the dock without injury. Approximately 1,100 gallons of diesel fuel were discharged into the waterway.

Following the accident, a damage assessment of the vessel during drydocking revealed a 1-inch diameter hole in the bottom of the rudder compartment. The marine surveyor performing the assessment told investigators that the hole was likely present before fuel was loaded onto the towboat.

The vessel was constructed with centerline swash bulkheads installed in the fuel and water tanks to improve the towboat’s stability by preventing the quick shift of the weight of fuel and water from one side to the other when the tanks were slack (not full). The first opening in these bulkheads was 24 inches above the bottom of the tank.

In its analysis of the accident, the NTSB report says that several factors affecting the stability of the Gracie Claire led to its capsizing.

Before the vessel arrived at the Stone Oil dock to take on fuel, the rudder compartment likely had been flooding from the hole in the bottom of the hull, a water ingress that the crew was not aware of. The water level in the compartment would have risen until it equaled the water level outside the towboat, nearly filling the compartment and creating the equivalent of a slack tank. The lost buoyancy from the water in the compartment would have resulted in the towboat having less freeboard. A lower freeboard would have decreased the towboat’s stability, because the main deck edge would be submerged at lesser angles of heel. The lower freeboard would also have made it easier for waves to wash across the main deck.

By mooring perpendicular to the seawall and not parallel to the waterway, the Gracie Claire was subjected to a heeling moment caused by the river current. When the captain and deckhand began loading fuel and water through the starboard fill pipes, the vessel already had a starboard list. Although the fuel and water tanks ran the full breadth of the hull, the centerline swash bulkheads would have contained the loaded liquids on the starboard side of the tanks until they reached the height of the 24-inch openings above the tank’s bottom. Because the liquids would have filled only the starboard side of their respective tanks, the vessel began listing further to starboard.

At the time, the equalizing line valves for the fuel oil tank were open, which was intended to balance the level of the tank’s contents on each side of the centerline swash bulkhead. Based on 24 inches of fuel oil above the pipe, investigators calculated that the line would transfer approximately 70 gallons per minute. However, considering a fill rate of 140 to 150 gallons per minute and the vessel’s continued heel to starboard, the captain was filling the tank at a rate that exceeded the capacity of the equalizing line to level the tank.

Aware of the increasing starboard list during filling, the captain decided to shift fuel-filling to the port side of the tank to counter the starboard list. He believed that a reduction in the list would occur because the fuel being loaded would accumulate on the port side, or high side, of the tank. However, with the vessel already listing to starboard, once the fuel reached the holes in the swash bulkhead on the port side of the fuel tank, the added fuel would shift by spilling over to the starboard side through the swash bulkhead openings, therefore exacerbating the starboard list. At the same time, the floodwater in the rudder compartment and in the water tank would also shift further to starboard. Had the water in the rudder compartment been discovered, the Gracie Claire’s owner or captain presumably would have taken measures to eliminate the water in the space before taking on fuel and water.

While the captain was filling the tank from the port side, the crewboat that passed astern added to the heeling forces on the starboard side. First, the displaced water of the passing vessel pushed the side of the hull below the waterline. Second, as the waves from the crewboat’s wake washed over the bulwark and onto the main deck of the towboat, they added weight on the starboard side of the main deck. With the starboard deck edge submerged, the Gracie Claire would have rolled more easily. Once the vessel reached a heel angle that allowed water to reach above the 20-inch coaming of the open door leading to the engine room, the vessel down-flooded and rapidly sank.

The National Transportation Safety Board determines that the probable cause of the capsizing and sinking of the Gracie Claire was the towing vessel’s decreased stability and freeboard due to undetected flooding through a hull leak in the rudder compartment, which made the vessel susceptible to the adverse effects of boarding water from the wake of a passing vessel.