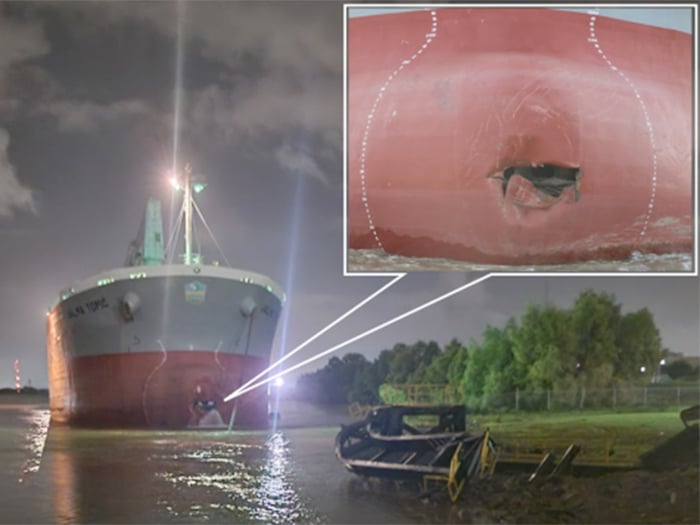 Jalma Topic downriver of the office barge with its port anchor out following contact. Inset shows a close-up of the damage to the vessel’s bulbous bow. (Background source: J. Claverie)​ [Image:NTSB]

The National Transportation Safety Board has released its report on a July 12, 2021, incident in which a 51,996 dwt bulk carrier slammed into a stationary barge being used as a floating office space near New Orleans. The office barge and moorings sustained damages estimated at $6 million. The bow of the bulker sustained an estimated $215,000 in damages.

The accident occurred when the Liberian-flagged, 623-foot-bulker Jalma Topic, owned by Lotina Navigation Company, and operated by Marfin Management, was transiting upriver on the Lower Mississippi River and lost steering and struck the barge.

​During the voyage, the rudder became stuck at port 10 degrees. According to the report, when New Orleans–Baton Rouge Steamship Pilots Association (NOBRA) pilot on board the bulker noticed the rudder was not responding he took immediate and effective action to ensure the people on board the office barge were warned of the situation, and attempted to slow the vessel as much as possible.

The office barge sustained damages to its superstructure and its hull. Electrical, plumbing and communication connections to the shore were severed, and the heating ventilation and air conditioning systems were damaged. The mooring system and all gangways and surrounding catwalks to the barges were either damaged or destroyed.

During the NTSB investigation, a technician found that a solid-state relay on the operating steering control system servo control board had failed, causing the loss of steering. In addition, the investigation found the steering control system manufacturer, YDK Technologies, had created a caution sticker and released an important notice to vessels with PT500 autopilot systems in December 2014 that addressed the failure experienced on the Jalma Topic. However, the vessel’s operator stated they were not notified of the 2014 notice and caution sticker from YDK Technologies until after the contact.

The National Transportation Safety Board determines that the probable cause of the contact of the Jalma Topic with the office barge was a loss of steering due to the failure of an electrical solid-state relay on the servo control board of the operating control system to the steering gear. Contributing was the lack of specific procedures available to the bridge team to respond to a failure of the steering control system.