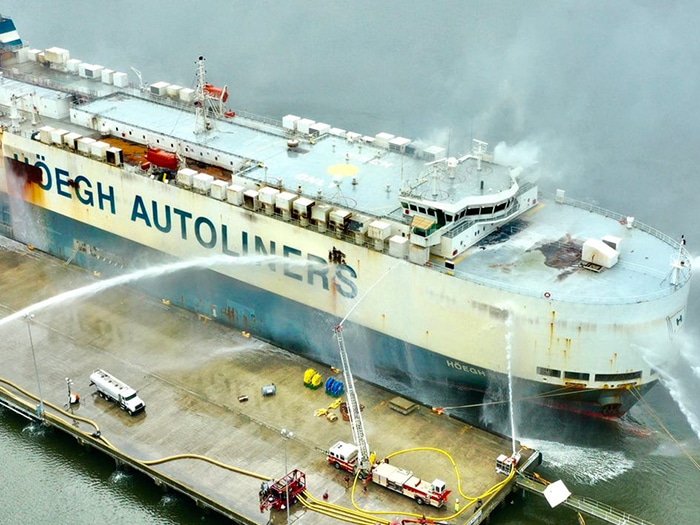 Firefighting efforts around the Hoegh Xiamen after it caught fire in Jacksonville, Fla., in June 2020. The fire was linked to a car battery. [Photo: Jacksonville Fire and Rescue Department]

While incentives to persuade drivers out of their gas-guzzlers and into electrical vehicles (EVs) may be good news for the climate, they should also be a wakeup call to vessel operators. A key component of EVs, and of all electronic devices is highly inflammable lithium-ion (L-ion) batteries. This, says marine insurer Allianz Global Corporate & Specialty (AGCS), is increasingly impacting shipping safety as demonstrated by a number of fires on vessels such as RO/RO car carriers and containerships.

Given the many difficulties involved with suppressing battery fires, particularly at sea, focusing on loss prevention measures is crucial, whether batteries are transported within EVs or as standalone cargo, according to a new report from AGCS.

“Shipping losses may have more than halved over the past decade but fires on board vessels remain among the biggest safety issues for the industry. The potential dangers that the transportation of lithium-ion batteries pose if they are not stored or handled correctly only add to these concerns, and we have already seen a number of incidents,” says Captain Rahul Khanna, Global Head of Marine Risk Consulting at AGCS. “Companies should do all that they possibly can to implement, develop and follow robust loss prevention measures, given the growing popularity of electric vehicles means many more vehicles with lithium-ion batteries will be transported by sea in future.”

The most common causes of these hazards are substandard manufacturing of battery cells/devices; over-charging of the battery cells; over-temperature by short circuiting, and damaged battery cells or devices, which, among other causes, can result from poor packing and handling or cargo shift in rough seas if not adequately secured.

“Batteries are not only a potential cause of fire if damaged, overcharged or subjected to high temperatures, they can also aggravate other causes of fire at sea and are difficult to extinguish as they have the potential to reignite days or even weeks later,” says Khanna. “In most shipboard incidents a thermal runaway event can be a significant possibility unless immediate action is taken by the crew, such as suppressing a fire with copious amounts of water over a long period of time. However, this can be extremely challenging due to factors such as early detection being difficult, a shortage of crew members on board, and if the vessel’s firefighting capabilities are inadequate.”

The primary focus must therefore be on loss prevention and in the report AGCS experts highlight a number of recommendations for companies to consider, focusing on two areas in particular: storage and in transit.

Among others, recommendations to mitigate the potential fire risk from Li-ion batteries include ensuring staff are trained to follow correct packing and handling procedures and that seafarers have had Li-ion battery firefighting training; checking the battery’s state of charge (SOC) is at the optimal level for transportation where possible; ensuring that EVs with low ground clearance are labelled as this can present loading/discharging challenges; and checking all EVs are properly secured to prevent any shifting during transportation.

In transit, anything that can aid early detection is critical, including watchkeeping/fire rounds and utilizing thermal scanners, gas detectors, heat/smoke detectors, and CCTV cameras.

The report also highlights a number of measures that can help ensure safe storage of Li-ion batteries in warehouses, noting that large-format batteries, such as those used in EVs, ignite more quickly in a warehouse fire than smaller batteries used in smartphones and laptops.

Among others, recommendations include training staff in appropriate packing and handling procedures; establishing an emergency response plan to tackle damaged/overheating batteries and a hazard control plan to manage receiving, storage, dispatch and supervision of packaged Li-ion batteries; preventing the exposure of batteries to high temperatures and ensuring separation from other combustible materials; as well as prompt removal of damaged or defective Li-ion batteries.

“If the maritime industry is to improve its incident record related to the transportation of lithium-ion batteries all parties involved in the supply chain must understand the hazards involved, the most common causes and the problems associated with transporting in commerce,” says Captain Randall Lund, senior marine risk consultant at AGCS, who authored the report together with fellow AGCS marine risk consultants Miguel Herrera and Justin Kersey. “Regulations and guidance are specific in addressing these batteries to help prevent most incidents, but these can only be effective if they are communicated and enforced. Only through a concerted effort by stakeholders in the supply chain can we hope to reduce the rate of incidents.”

Other relevant findings from the expert risk article accompanying the report include: