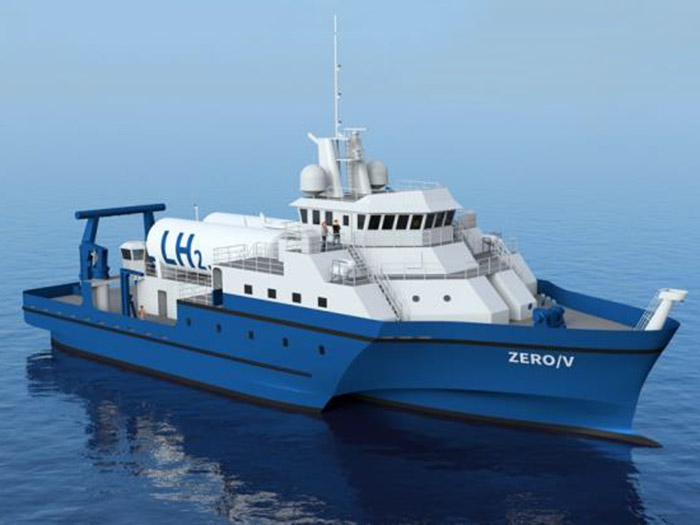 JULY 2, 2018 — Classification society DNV GL has awarded Sandia National Laboratories an Approval in Principle (AiP) for the design of a new “Zero V” research vessel developed in collaboration with Glosten and the Scripps Institution of Oceanography.

The design emerged from a feasibility study funded by the U.S. Department of Transportation’s Maritime Administration that set out to evaluate the technical, regulatory, and economic aspects of designing, building and operating a hydrogen fuel cell powered zero-emission coastal research vessel.

“Zero-V”, has been designed as a workhorse capable of fulfilling the scientific missions of Scripps, while releasing no harmful emissions to air or greenhouse gases. To meet these goals, Scandia concluded that fuel cells powered by liquid hydrogen (LH2), produced through the use of renewable energy, was the best solution.

With a tank capacity of 11,000 kg the vessel could operate at a speed of 10-knots over a 2,400 nautical mile range, with fuel available at four different ports of call along the U.S. West Coast.

“As shipping moves towards a regulatory environment that will require lower emissions and greater sustainability, it is essential that we work on the technologies of the future today,” says Freddy Friberg, Regional Manager for DNV GL Maritime Americas. “The fuel cells used in the Zero V concept in combination with liquid hydrogen are one of the propulsion technologies that can have a significant impact on the sustainability of the maritime industry. We are very pleased that Sandia chose us to work with them on realizing this concept and look forward to its future development and successful deployment.”

The use of fuel cells in combination with liquid hydrogen is a key part of fulfilling Zero V’s role as a research vessel. Fuel cells can provide low noise operation, which contributes to the wellbeing of marine life and the integrity of acoustic measurements, as well as the comfort for those on board.

While the hydrogen fuel means that air samples can be taken without contamination from conventional engine emissions. The pure, deionized water generated by the fuel cells can also be captured and used for drinking water for the scientific staff and crew, or for experimental and analytical purposes, reducing the amount of potable or experimental water needed to be carried on-board.

DNV GL’s approval in principle is an independent assessment of a concept, and confirms that the design complies with the DNV GL rules for the classification of ships and that no significant obstacles or “show stopping” issues that might prevent the concept from being realized have been identified.

For a free copy of the full Sandia report, go HERE