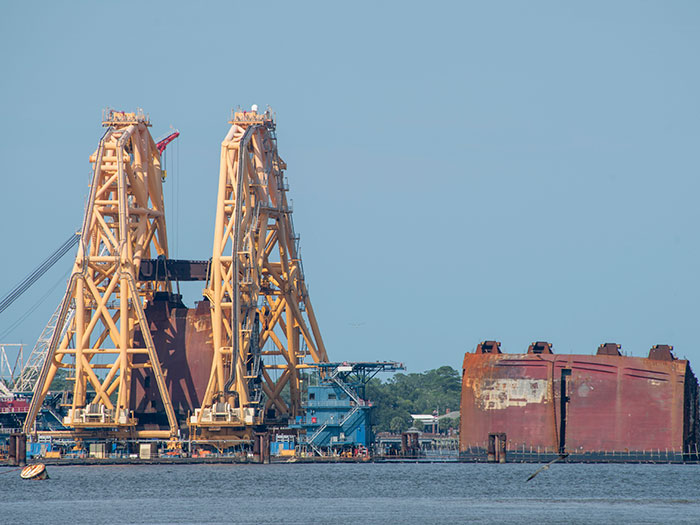 The St. Simons Sound Incident Response says that the source of oil discharges from Section Six of the wreck of the capsized car carrier Golden Ray has been identified and contained. The discharges began after the section was separated from the rest of the wreck and dealing with them has delayed progress on removal of the wreck, section by section, from St. Simons Sound, Ga.

Since securing the vent, observers report minimal amounts of oil around the section. Pollution mitigation teams will continue to monitor the section for any potential oil discharges and oil recovery vessels remain on-station 24-hours.

On Sunday, the heavy lift catamaran VB-10000 began to shift into a position to allow for a weight-shedding team to remove vehicles and any moveable decks from SEction Six section as required to reduce its overall weight. The section will be lifted and stowed onto a dry-dock barge once it is safe to do so.

“The training and preparation of the shoreline and on-water response teams showed in their rapid response to oil-impacts from Section Six,” said State On-Scene Coordinator John Maddox of the Environmental Protection Division of the Georgia Department of Natural Resources, “we encourage the public to continue to remain vigilant when fishing, swimming or accessing the beaches until removal of the wreck is completed.”

Approximately 30 pollution response vessels remain at the wreck site to monitor for and mitigate any oil.