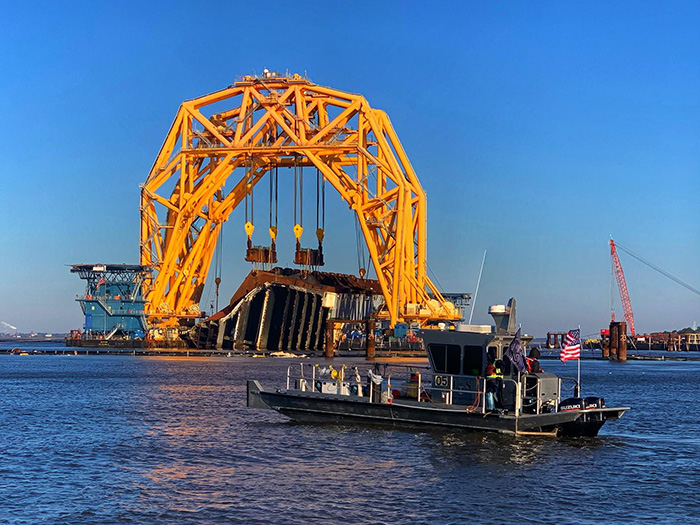 As cutting operations by the heavy lift vessel VB-10000 continue, responders monitor the vicinity around the Golden Ray wreck for any signs of pollution during cutting operations. [St. Simons Sound Incident response photo]

The St. Simons Sound Response team has now started operations to remove Section Two of the hull of the capsized car carrier Golden Ray, which is being sliced into eight giant sections for removal and recycling.

When we last reported on the responders’ progress, their efforts had been concentrated on removing Section Seven, at the opposite end of the wreck, which is being sliced into eight giant sections for removal and recycling.

That effort had a setback when in a link in the cutting chain being used to slice the wreck failed. Given the completion of cutline preparations for Section Two and to avoid further delay, the Unified Command approved a plan to shift the heavylift vessel doing the cutting, VB-10000, and begin cutting operations on that section.

While the VB-10000 cuts and lifts Section Two, divers will survey Section Seven and install a system so that the cutting chain can be placed back into the cut groove.

The barge Julie B is expected to arrive in Brunswick, Ga., this week and will receive Section Two once the section is separated and lifted. Response engineers continue to collect data from fixed monitors and hydrographic surveys and they confirm that the wreck remains stable.

Responders continue to observe and recover oil sheens and debris on the water around the wreck site. Survey teams continue to assess the shoreline to find and remove any debris or other environmental impacts.