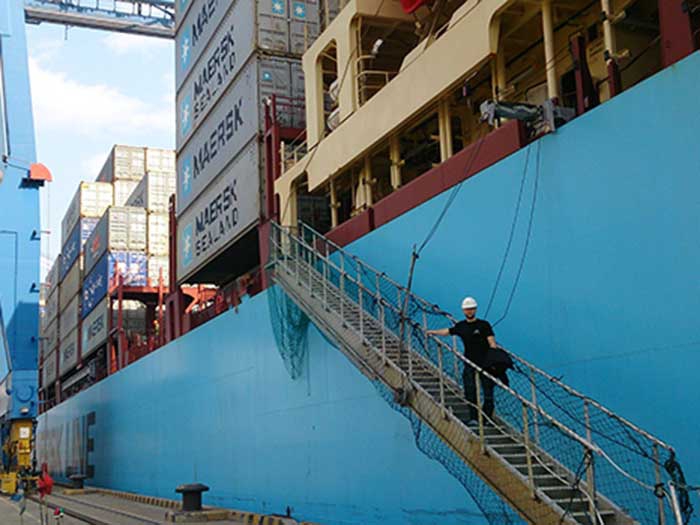 As part of the PhD process, Kræn Vodder Nielsen sailed on a large containership

MAY 5, 2017 — In cooperation with MAN Diesel & Turbo, a Technical University of Denmark (DTU) researcher is developing new software that makes it possible to limit emissions of NOx particles and black smoke. DTU says it will be implemented in new marine engines from the end of 2017.

“EGR technology is one way of reducing NOx emissions. However, the regulator for the EGR technology meant that black smoke was created in connection with rapid acceleration of the ship, which is undesirable and can damage the engine,” says Caspar Hededal Svendsen, Head of Emission Control, Casper MAN Diesel & Turbo. “The black smoke could be removed by maneuvering ships differently, but we wanted to maintain the current sailing properties and solve the problem in a different way instead.”

“We found that there was a need for greater use of advanced technology. It was difficult to align the task with the other development tasks, and we therefore decided to enter into a business PhD collaboration with DTU to see whether that would help us proceed,” says Mr. Svendsen.

The cooperation involved the DTU Electrical Engineering department which has extensive knowledge of automation and control, and also Linköping University, with expertise in engines for cars and trucks.

PhD student Kræn Vodder Nielsen found that it was not possible to just copy the approach from car engines.

“I focused instead on developing a new method that is better suited to marine engines,” he says.

In EGR technology, part of the exhaust gas is recirculated to the engine to limit NOx emissions. It is crucial that the recirculation take place with the right quantity of exhaust so that enough is recirculated to reduce the formation of NOx and there is sufficient oxygen to combust the fuel – thus preventing black smoke when the ship accelerates or slows down.

Relatively early in the PhD process, Kræn Vodder Nielsen sailed on a large containership to get a sense of how his research would ultimately be used.

“I found out that the academic methods for development of the control of a marine engine with EGR technology at that time were too complex,” he says. “Therefore, it quickly became clear to me that I had to develop a simple model that includes only the critical part of the system that we wanted to improve. From there, we developed a new control that coordinates the recirculation and fuel injection without requiring too much tuning of other parts of the system.”

Mr. Nielsen succeeded in developing new state-of-the-art control technology that was tested on a couple of marine engines during the project. According to DTU, this quickly showed that it worked, avoiding the formation of black smoke without affecting the vessel’s maneuverability.

Mr. Nielsen is now employed by MAN Diesel & Turbo, where he is helping finalize his software so that, from the end of the year, it can be implemented in new marine engines.

“Initially, I will go out and install it on the ships, but in the long term the plan is that I will write a guide so that shipbuilders and crews can fine-tune the system themselves,” he says.