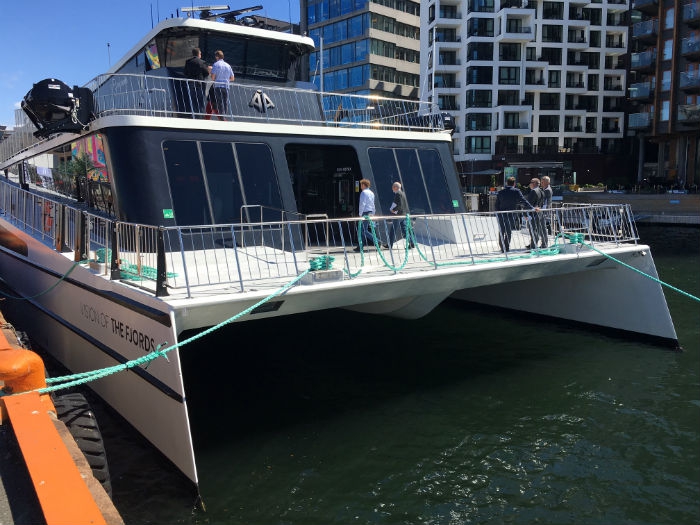 JUNE 2, 2017—On the day when President Trump said the United States would pull out of the Paris Climate Accord, Norway’s Minister of Trade and Industry Monica Maeland was busy unveiling the construction of a new environmentally friendly, all-electric passenger vessel for Norwegian operator The Fjords.

The timing of the Minister’s announcement of the new all-electric ferry was both ironic and purely coincidental—it was part of one of the many marine technology-related events held in conjunction with Nor-shipping 2017, a biennial trade show held this past week in Oslo. It did, however, serve to starkly contrast the policies of the two nations. Norway—a country connected with the sea and the offshore oil industry—clearly wants to be a global frontrunner in the development of green technology.

Minister Maeland’s announcement was in line with the Norwegian government’s policy unveiled this past February, which aims to contribute to the highest possible sustainable value creation in marine industries. The minister made the announcement onboard The Vision of The Fjords, a 400-passenger, lightweight carbon fiber-hulled hybrid propulsion catamaran. The new boat will be named The Future of The Fjords. While scant technical details were available on the new boat, it figures to rip a page from the award-winning The Vision of The Fjords, which was designed and built by Norwegian company Brødene Aa. The 42m x 15m catamaran boat is based on a design that Brødene calls Sealight, which is aimed at providing a unique sightseeing experience while minimizing the vessel’s environmental footprint.

The Vision of The Fjords is equipped with an electric hybrid propulsion system developed by ABB, powered by MAN diesel engines or by batteries from ZEM. During sightseeing operations in Norway’s sensitive fjords, the carbon fiber-hulled vessel uses battery power only. The batteries can be charged either by on-shore power or by the engines on board. The boat’s deck design is inspired by a twisting mountain road, giving tourists the ability to easily walk around the boat to get the best views of the breathtaking scenery.