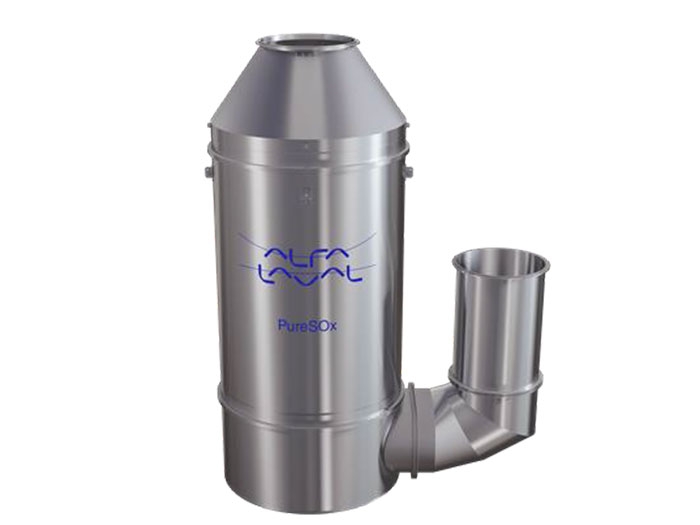 “We have a strategy of continuous development for the Alfa Laval PureSOx platform,” says René Diks, Manager Marketing & Sales, Exhaust Gas Cleaning at Alfa Laval. “We launched our inline I-design in December 2015, and we are pleased to follow it so soon with significant advances in our U-design.”

The PureSOx U-design, which is used on the majority of vessels, is a U-shaped configuration where the jet and absorber sections are separated by a natural water trap. In the updated version, available since May 1, the exhaust gas flow through the scrubber has been optimized, allowing a significant reduction in scrubber height – 26% in the jet section and 17% in the absorber section – along with a reduction in weight.

A key factor in achieving the reductions was the minimization of back pressure, which has been done entirely without exhaust gas fans.

“Avoiding additional equipment high up in the funnel is advantageous for maintenance and stability,” says Mr. Diks. “All advances in the PureSOx U-design, including the reduced back pressure, have been made by working with the exhaust gas flow itself.”

The reduction in size and weight adds to the advantages of the PureSOx U-design, which include the natural water trap, simple connection to multiple inlets and easy switching between open-loop and closed-loop modes. A smaller scrubber facilitates placement and reduces installation costs, while a lighter scrubber reduces the impact on vessel stability. In some cases, the smaller U-design may also be placed lower in the ship, which will have further stability benefits.

“The improvements make it even clearer that the choice of U-design or inline I-design is not specific to vessel type,” says Diks. “A scrubber should be customized for the vessel it serves, and the new U-design makes the PureSOx customization process more flexible.”

The U-design improvements come at the same time as there is a renewed sense of urgency surrounding SOx scrubbers. At IMO’s MEPC 69, which convened in London in late April, it was agreed that the question of a global 0.50% fuel sulfur cap would be resolved at MEPC 70 in October. Whether the cap appears in 2020 or 2025 will hinge on a study by CE Delft, which will report on the availability of low-sulfur fuel. The study, prescribed by MARPOL Annex VI regulation 14.8, is being supervised by a steering committee consisting of member states, non-governmental organizations and one intergovernmental organization.

“It is impossible to speculate on the outcome of the study or of MEPC 70,” says Mr. Diks. “But scrubber technology will be considered in assessing the adequacy of the fuel supply. PureSOx has shown that SOx limits can be met reliably, even without low-sulfur fuel.”