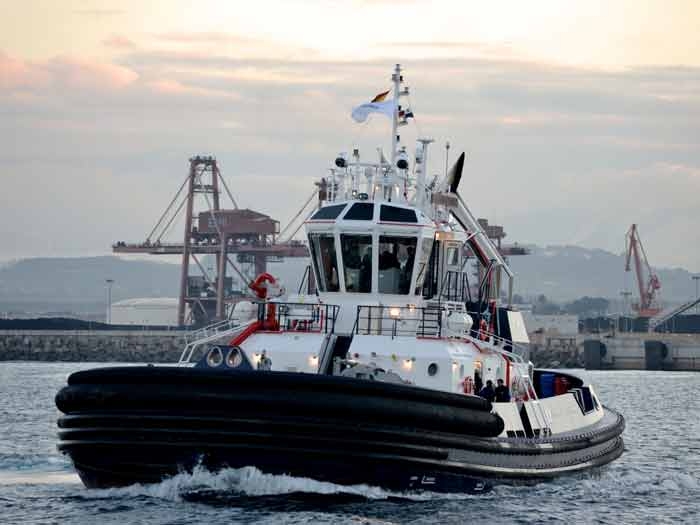 Cerro Itamut – one of 14 tractor tugs for the Panama Canal Authority propelled by two SRP 2020.

FEBRUARY 26, 2014 — The Panama Canal Authority has invested in a new generation of powerful tugs with the muscle needed to handle the larger ships of the Post-Panamax era.

In the last four years it has commissioned 14 tractor tugs from Spanish shipbuilder Astilleros Armon and 13 ASD tugs from the Cheoy Lee shipyard in Hong Kong. All 27 tugs have Schottel propulsion systems.

The last tractor tug in the series from Astilleros Armon was recently completed. These tugs will replace locomotives at the new Atlantic locks. They have a bollard pull of 85 tons and with a length of 28.90 meters and a width of 13.50 meters, are a good deal larger than the ASD tugs. Two Schottel SRP 2020 Rudderpropellers (each with 2,330 kW of input power) drive each tug. The tractor tugs are named after mountains in Panama (Cerro Itamut, Cerro Picacho etc.).

Completed earlier, the ASD tugs from Cheoy Lee shipyard are named after Panamanian rivers. The first vessel to arrive in Panama was the Calovébora in 2010, the others followed in intervals of six weeks. The tugs needed just over two months for the 9,700 miles, with a stop in Honolulu to refuel. The 27.40 meters long and 12.20 meters wide ships with a bollard pull of about 65 tons were built to Robert Allan] Z-Tech 6500 design. Each tug is driven by two Schottel SRP 1515 Rudderpropellers, with an input power of 2,180 kW each.

Four more ASD tugs with two Schottel SRP 1212 Rudderpropellers each have already been in service on the canal since 2001. Older models have been replaced in the course of modernizing the fleet.

The 5 de Noviembre ferry is another modern vessel with a Schottel propulsion system working at the Panama Canal. The double-ended ferry is in service at the Gatun locks. Though vehicles used to have to wait at a narrow bridge for 45 minutes, today they only need three minutes to make the crossing.

The ferry, which was also built in the Cheoy Lee/Hin Lee shipyard, is 42 meters long and 14 meters wide, with space for 24 trucks and 20 passengers. Two SRP 170 Rudderpropellers give it a cruising speed of 8 knots when fully laden.