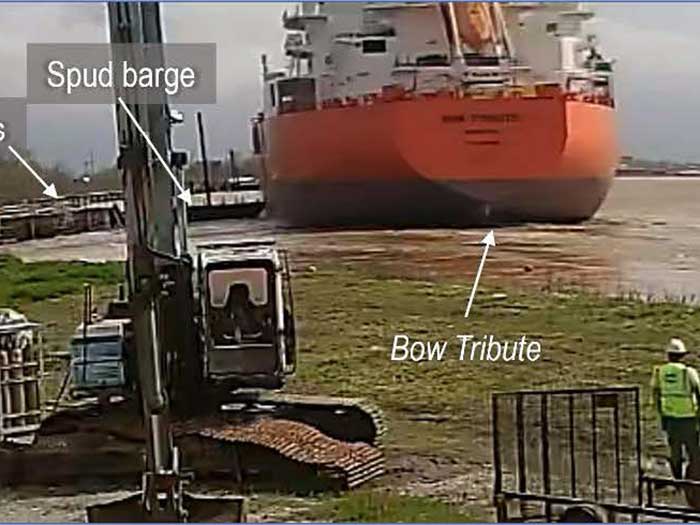 The National Transportation Safety Board (NTSB) has issued its report on its investigation into the March 16, 2021, grounding of the 49,662 dwt Odfjell tanker Bow Tribute and its subsequent contact with the fender systems protecting two river intakes owned by the New Orleans sewerage and water board.

The Bow Tribute was transiting downbound in the Lower Mississippi River when it grounded while attempting to overtake a two-barge tow in a river bend. No injuries or pollution were reported. Damages totaled over $1.9 million, including $986,400 in damages to the vessel and $926,100 in damages to the fender systems.

On board the Bow Tribute was a New Orleans-Baton Rouge Steamship Pilots Association (NOBRA) pilot and a 27-person crew. Ahead of the tanker, also traveling downbound, was the ACBL towing vessel American Way, pushing two empty barges, with a crew of four. The NOBRA pilot and the tow boat pilot agreed the tanker would overtake the tow at Nine Mile Point, within the Carrollton Bend. There was additional traffic in the area of the American Way, including the downbound towboat Capt JW Banta, pushing two barges, and the upbound bulk carrier Red Cosmos.

You really need to read the full NTSB report to get the blow-by-blow account of what happened.

“As the NOBRA pilot ordered the engine to full astern, the master of the Bow Tribute arrived on the bridge and recalled seeing the Bow Tribute was so close to the bank that there was only one direction to turn, to starboard, but the American Way was close on the starboard side and therefore in the way. At 1521:45, the sound of vibrations could be heard on the bridge from the ship’s voyage data recorder, and on closed- circuit TV (CCTV) cameras located on the left descending bank, the stern of the Bow Tribute could be seen momentarily interacting with the bank (grounding) and its stern rising out of the water while the vessel was traveling about 10.3 knots. The tanker continued along the left descending bank with about 21 knots of wind on its starboard side. The NOBRA pilot on the Bow Tribute, not wanting to collide with the American Way, told investigators that he kept the vessel near the shoreline because he could no longer see the American Way under the Bow Tribute’s starboard bow.

“Seconds later, at 1522:26, the port side of the Bow Tribute struck a spud barge moored at mile 104.1 for the New River water intake system owned by the Sewerage and Water Board of New Orleans. The barge was part of a fender system to protect the river intake pipes. After being struck, the barge broke free from its spuds and moorings and drifted downriver. The NOBRA pilot on the tanker issued a series of rudder orders to port and starboard and, at 1522:38, ordered the starboard anchor let go, seeing the American Way was not at risk of being below the Bow Tribute’s starboard anchor. The second officer relayed the order to the bosun on the bow, who let go the starboard anchor without delay.

“At 1525, as the Bow Tribute slowed in the bend with its starboard anchor paying out, the tanker struck another protective spud barge, which was located at the Oak Street water intake at mile 103.8, about 1,500 feet downriver from the New River water intake. About a minute later, the NOBRA pilot ordered the engine to be stopped. At 1527, with the NOBRA pilot ordering the anchor held at 7 shots in the water (630 feet), the Bow Tribute began to turn around and face upriver.”

​The NTSB determined the probable cause of the accident was the tanker pilot’s decision to overtake a tow in a large river bend occupied by multiple vessels during high-river conditions with a strong following current. Contributing to the grounding was the ineffective communication between the pilot of the Bow Tribute and the pilot of the towing vessel American Way regarding where the overtaking maneuver would occur.

“Clear, effective, and unambiguous radio communications should be used, especially during high traffic and dynamic conditions such as overtaking in a bend,” the report said.