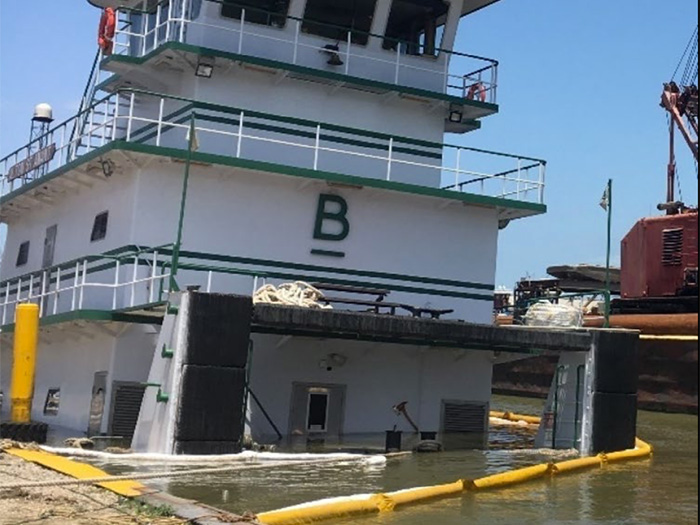 The National Transportation Safety Board has issued its report on a May 17, 2020, incident in which the Blessey Marine towing vessel Alton St. Amant was found by a shipyard worker to be partially submerged while moored at a shipyard in the Harvey Canal in New Orleans, La.

There were no crewmembers or shipyard workers aboard the vessel. Approximately five gallons of diesel fuel were released into the water. Damage to the vessel was estimated at $1.5 million. No injuries were reported.

On Friday, May 15, about 24,000 gallons of fuel were loaded onto the vessel. The flush hatches to the vessel’s two potable water tanks located on the main deck in the rudder room had been opened for maintenance, but the covers were not reinstalled at the end of the day. That same day, the port engineer requested that the shipyard workers fill the two potable water tanks.

A pipefitter returned to the shipyard the following morning, on Saturday, May 16, and began reinstalling the bilge pumps with three other shipyard workers at about 5 a.m. At about 10 a.m. after completing the pump installation, he started filling the potable water tanks from a shoreside water manifold that was connected to the vessel’s potable water fill pipe via a 2-inch hose through the open exterior engine room doors. He opened the supply (fill) valve at the shoreside manifold, and began filling the two tanks, which had a combined capacity of 13,233 gallons.

Unaware that the potable water tank access hatches were open in the rudder room, he left the shipyard about 10:30 a.m. with plans to return the next day. He intended to fill the tanks and then allow them to overflow onto the exterior main deck through their vents to flush out any residual debris inside before turning off the water supply.

Throughout the remainder of the day and throughout the night, the two potable water tanks continued to fill with fresh water on the unmanned Alton St. Amant. After the pipefitter left, no other shipyard workers boarded the vessel to check the water tank levels.

About 6:30 a.m. on Sunday, May 17, a shipyard worker walking past the Alton St. Amant noticed that the vessel was sitting low in the water and called the shipyard general manager.

On arrival, the general manager found the Alton St. Amant partially submerged and resting on the bottom of the canal alongside the pier. The engine room was flooded, and the main deck was partially submerged. The U.S .Coast Guard, Blessey personnel, and a local salvage company were notified. While observing the Alton St. Amant, the general manager noticed the potable water hose connected to the vessel was charged; he then closed the potable water supply valve on the pier manifold.

After shipyard managers reported to the shipyard on the morning of the sinking, the potable water supply valve at the manifold ashore was found in the open position.

The pipefitter was not aware of the open access hatches when he began filling the tanks. After he departed the vessel, no other persons came aboard to monitor the status of the tank levels, and there was no shipyard policy for monitoring the filling process.

Having been filled for several hours, the potable water tanks reached capacity, resulting in an overflow through the open hatches in the rudder room (rather than the tank vents as planned). After the rudder room flooded, the water spilled over the open doorsill onto the main deck of the engine room and began flooding down into that space.

With the bilge system inoperable due to planned maintenance during the shipyard period and no one aboard the vessel to monitor the water transfer, the potable water continued to fill the aft spaces undetected and submerged the vessel until it came to rest on the bottom of the canal.

The National Transportation Safety Board determines that the probable cause of the flooding of the towing vessel Alton St. Amant was the absence of shipyard pre-inspection and monitoring procedures for water transfer, which resulted in potable water tanks overflowing through their open access hatches during an unmonitored transfer.

Crew and shipyard personnel designated to conduct liquid transfers must be aware of the status of a vessel’s tanks, including their access hatches and associated piping systems, whether ashore or at sea. When filling a tank, open access hatches create a risk of unintended flooding.

Pre-inspection and monitoring of transfers provide the opportunity to identify and remedy any issues in order to ensure they are safely completed.