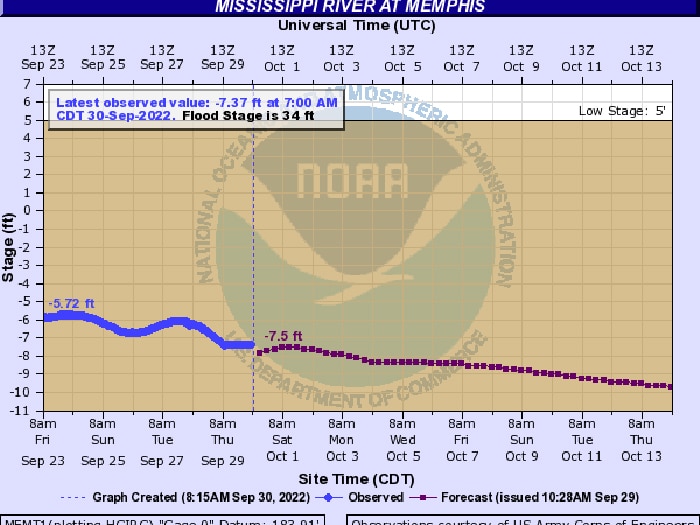 NOAA snapshot of river conditions at Memphis on September 30, 2022

As if agricultural shippers did not have enough supply chain challenges to occupy multiple lifetimes, there is current and growing concern related to the diminished water levels along the inland waterway system that will impact barge transportation. This will become more acute as we increasingly enter harvest season.

Due to the scarcity of precipitation throughout the year, the water depth along our navigable waterways is limiting the efficiency of barge transportation in two ways—channel depth and channel width. Currently, the area of particular concern is the Mississippi River south of St. Louis.

Let’s assume a soybean-growing region will need to transport 100 million bushels of soybeans via barge. Under normal conditions, 100 million bushels ÷ 750,000 bushels per 15 barge tow = 133 barge tows required. If the water level for loading is decreased by 1 foot and if you utilize the conservative 150 fewer short tons (5,000 fewer bushels) per load, the 15 barge tow will be loaded with 75,000 fewer bushels. This is the equivalent of removing the entire production of three soybean farms from a single barge tow (500 acres of soybeans per farm X 50 bushels an acre = 25,000 bushels). Under this scenario, 148 barge tows will be required (100 million ÷ 675,000 bushels per 15 barge tow).

Barge companies are announcing a maximum of 25 barges south of St. Louis. Since there are no locks and dams located on the Mississippi River south of St. Louis, barge tow sizes are larger since they do not need to transit lock chambers and the size limitations they impose. During drought conditions, the shipping channel becomes narrower, which necessitates reduced tow sizes. Barge tows south of St. Louis can often include 30-40 barges. A reduced maximum to 25 barges is therefore significant.

When attempting to transport an expected robust harvest via a less efficient inland waterway system, it becomes analogous to attaching a garden hose to a fire hydrant. Having to load barges lighter and restricting the number of barges results in needing more roundtrips to accommodate a given amount of volume. The expected result of this is higher barge shipping rates. According to the U.S. Department of Agriculture, transporting a ton of soybeans – loaded along the Mid-Mississippi River (i.e. – region between St. Paul and St. Louis) cost $51.02 per ton during the week ending on September 20, 2022. For the week ending September 21, 2021 (one year earlier), the same shipment cost $38.30—a 33% increase.

Unfortunately, precipitation over the next month is expected to be limited—further exacerbating the shipping challenges. When combined with an overall supply chain under stress, agricultural shippers are expecting some difficulties in getting soybeans and grain to market. Fortunately, we have the most productive farmers on the planet and an infrastructure that, despite these challenges, remains the envy of other soybean and grain producing countries, but the current and expected conditions along the Mississippi River are clearly a reason for concern.