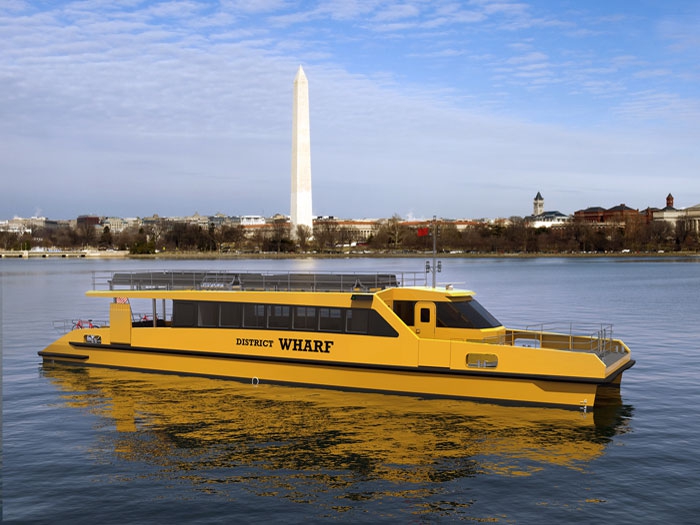 The vessels for both projects have been designed by BMT Designers and Planners, drawing from the company’s extensive portfolio of proven low-wake, low-wash hull forms. Both vessels are USCG Subchapter T compliant and have been designed to combine passenger comfort with fuel efficiency and low environmental impact.

Metal Shark will commence deliveries of vessels to Potomac Riverboat Company in 2017, and to RTA in 2018. Rendering of the vessel design is shown at right.

“Efficiently producing multi-vessel orders of sophisticated design within tight timeframes is what we do best,” says Carl Wegener, Metal Shark’s Director of Commercial Sales. “With our large in-house team of engineers and project managers, we’re able to take complete design packages to the next level, ensuring high quality construction and delivering great value to our customers.”

These two awards represent the latest multi-vessel passenger ferry construction projects for Metal Shark’s Franklin, LA, shipyard, which the builder opened in 2014 and is currently expanding to meet increased production volume. In 2016 Metal Shark was awarded a contract to produce multiple high speed aluminum catamaran ferries for New York’s CityWide Ferry System, which are currently being built alongside other projects at the yard.

“These newest awards are the result of extensive collaborative efforts between Metal Shark, BMT, and our newest customers, Entertainment Cruises and RTA,” says Metal Shark’s CEO Chris Allard. “All of us at Metal Shark are honored to have been selected to produce these state-of-the-art passenger vessels that will serve New Orleans and the Washington, DC area for years to come.”