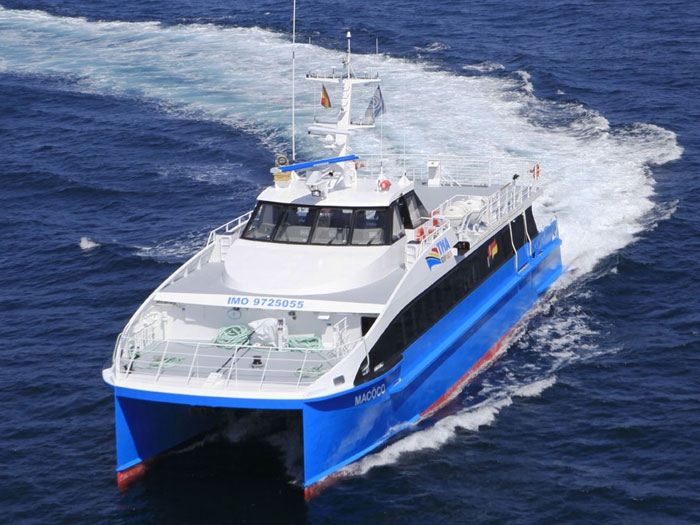 The two ferries are the first of five Incat Crowther designed vessels in an aggressive Angolan infrastructure-building project that also includes a pair of 36 m ferries that will shortly also be delivered from Astilleros Armon and a 20 m catamaran buoy workboat under construction by the Instituto Hidrográfico e de Sinalização Maritíma de Angola.

The 136-passenger Macôco and Panguila are IMO HSC Passenger (A) certified and Angola flagged.

With hard wearing interiors and simple, practical propulsion packages, Macôco and Panguila have been designed for efficient long-range operation and low maintenance costs, appropriate to the area of operation.

Mechanically-operated fold-down boarding ramps are fitted at the stern quarters, leading directly into the main deck cabin, which features seats for all 136 passengers, as well as a bar and three bathrooms, including one that is handicap-accessible.

The hulls have cabins for four crew members, as well as a galley and mess and a dedicated harbor generator. The upper deck houses the vessel’s wheelhouse, providing 360 degree visibility.

Macôco and Panguila are each powered by a pair of Caterpillar C32 main engines, producing 970kw and driving Rentjes gears. Both vessels performed well in sea trials, reaching top speeds over 27 knots. The vessels have a service speed of 25 knots.