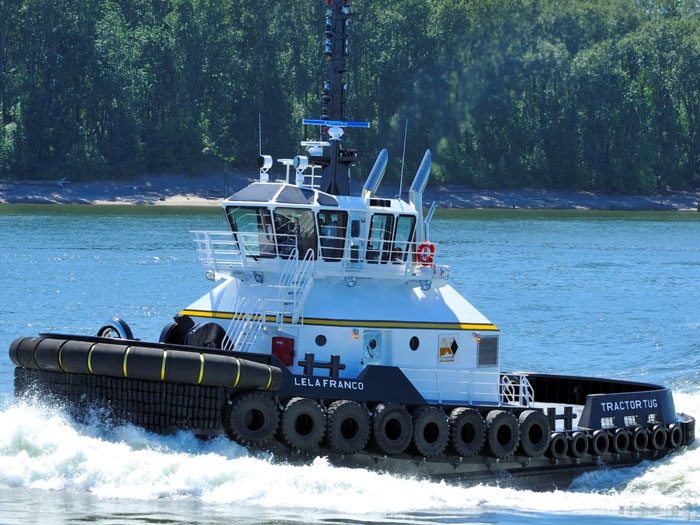 The Lela Franco, named in honor of the  wife of HMS founder Harley Franco, is a sister ship to the Michelle Sloan delivered earlier this year. Designed by Robert Allan Ltd., both tugs were built at shipbuilder Diversified Marine Inc.'s Portland, OR, shipyard.

The Lela Franco is the sixth tractor tug HMS has added to its fleet in under two years, improving its ship assist and tanker escort capability and bringing more horsepower to the U.S. West Coast. Like its twin sister the Michelle Sloan, it is an enhancement of HMS tugs the Tim Quigg and John Quigg, built in 2004 also by DMI. These enhanced designs developed by Robert Allan Ltd. feature a wider hull, increased bollard pull performance, improved crew accommodations, and a modified skeg.

Particulars of the Lela Franco are as follows:

The tug was designed and constructed to satisfy all applicable USCG rules and regulations and meets or exceed classification society minimum scantling requirements. Tank capacities are as follows:Fuel Oil:          32,800

The deck machinery comprises a Markey DEPC-48 render-recover type ship assist hawser winch on the bow, spooled with 500' of 9" line, and a Markey DEPC-32 towing winch aft with a capacity of 250' of 6-1/2" line. In addition, a capstan is installed on the fore deck to facilitate line handling operations.

The raised forecastle and elevated wheelhouse ensure good all-round visibility of the working decks and when handling large barges with high freeboard. The higher freeboard feature also provides a high standard of seakeeping when working in exposed waters, but is configured so as not to impede the ability of the tug to work closely under the flare of the newer generation of large ships.

The electrical plant consists of two (2) identical CAT C6.6 diesel gen-sets, each with a power output of 125 ekW, 60 Hz.

Ship-handling fenders at the bow consist of one tier of 36" OD x 18" ID cylindrical fender at the main deck level, with 12" loop type Schuyler fenders between the main deck and the knuckle, 11" laminated bow fenders below, and 12" hollow D style fenders along the stem and skeg. Tires and 8" hollow "D" fender provide protection at the main and forecastle sides and sheer lines, and 12" loop type fendering is used at the stern.