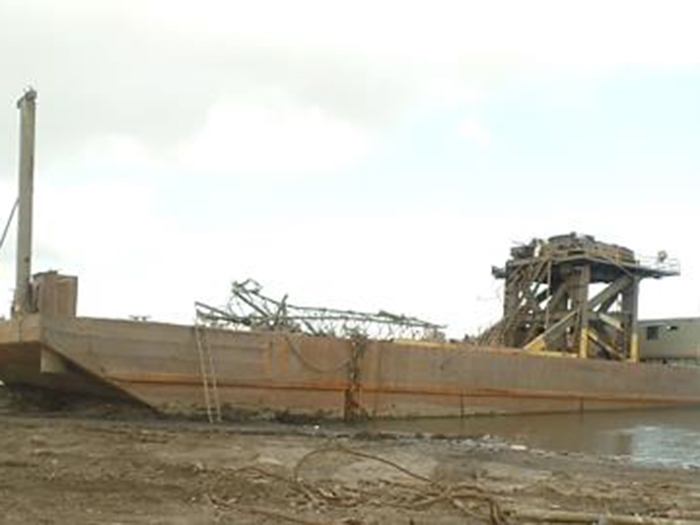 SEPTEMBER 1, 2016 — The National Transportation Safety Board has issued a report on the August 2015 sinking of the deck barge Margaret.

The barge, which was anchored at a fleeting area at mile marker 159.5 near Convent, Louisiana, began taking on water at an increasing rate during the night shift of August 30–31, 2015.

A production manager, who was making inspection rounds every two hours, tried to increase the barge’s dewatering capacity to stem the flooding, but by 0330, the Margaret listed heavily to port and sank moments later. No injuries were reported. A light sheen of suspected diesel oil was noted at the incident location. The barge owner estimated the loss at $2 million.

According to the NTSB, the Margaret was one of ten uninspected deck barges fitted with cranes that the owner, Associated Marine Terminals, acquired when the company bought St. James Stevedoring in March
2015. The barges were in various states of disrepair. Some of the barges were surveyed before and following the acquisition; however, the Margaret was not.

In its last survey in August 2014, the barge and its fixed pedestal crane were valued at $2 million.

The Margaret’s hull was compartmented with one longitudinal and four transverse bulkheads subdividing the hull into eight void compartments. Each void was accessible through an 18-inch manhole cover and a ladder. The survey focused on the external portion of the barge; the surveyor stated that gauging was not conducted to determine the thickness of structural members, watertight integrity was not inspected, and none of the internal compartments were available for inspection.

The National Transportation Safety Board determined that the probable cause of the sinking of deck barge Margaret was flooding of the port stern void due to the barge’s overall lack of maintenance and watertight integrity. Contributing to the sinking was the barge company’s lack of formal reporting procedures for its production managers conducting inspection rounds of the barges.