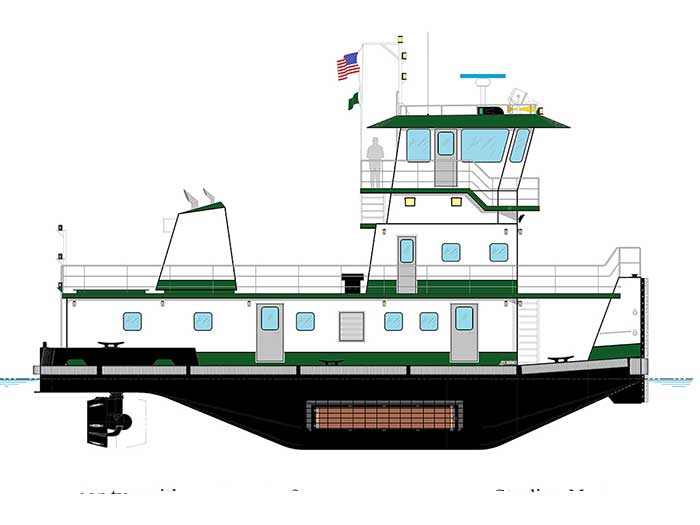 MAY 25, 2017 — Barbour JB Shipyard in St. Louis, MO, has laid the keel for a new harbor tug that will be powered by Veth Z-drives.

Designed by Sterling Marine, the tug has a planned length of 68′ and beam of 28′. It will be powered by twin 750 hp Cummins diesels and Veth VZ-700 Z-drives. The expected launch is January 2018.

The purchase agreement for the Z-drives was signed at the Inland Marine Expo in St. Louis, by Kurt Johnson, Southern Illinois Transfer president and owner of the vessel; Guido Davids, Veth Propulsion area sales manager; and Tim Batten, Twin Disc director of global marine sales. Twin Disc is the distributor for Veth Propulsion in the U.S., exclusive of the Gulf Coast region.

While this is the first Veth Propulsion product purchased by Southern Illinois Transfer, it was Johnson’s history with Twin Disc that drew him to the Z-drives.

“We’ve always used Twin Disc reduction gears,” he noted. “Their choosing to partner with Veth says a lot—we’re certain they wouldn’t associate their name with an inferior Z-drive. The combination of a well-built thruster and Twin Disc’s reputation, extensive parts supply and outstanding customer service was a win-win for us.”

Southern Illinois Transfer, a partner in Barbour JB Shipyard, will use the harbor tug to move barges on the Mississippi and Kaskaskia Rivers. It currently operates seven vessels in the Ste. Genevieve, MO, area, and is building another boat to expand its fleet.