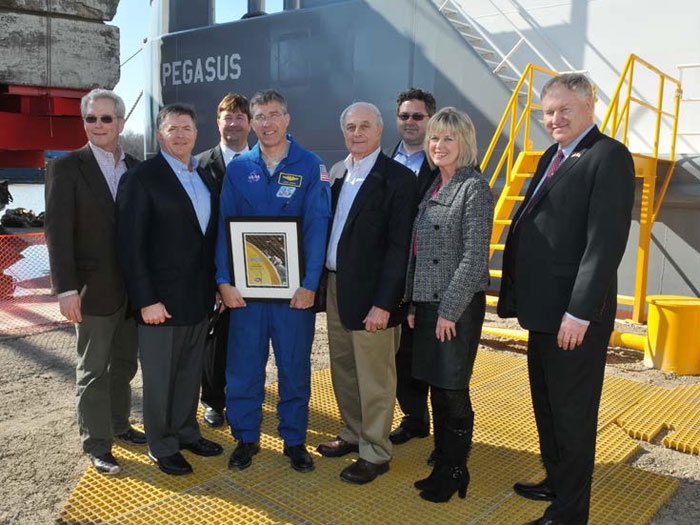 FEBRUARY 12, 2015—Morgan City, LA-based Conrad Shipyard received the NASA Space Flight Awareness Supplier Award for its performance for its work on the conversion of the NASA Pegasus barge. The award honors outstanding performance by suppliers who support NASA human space flight programs. Awardees are chosen based on their production of high-quality products, excellent technical and cost performance, and adherence to schedules.

The Pegasus barge was originally specially designed and built to carry space shuttle external tanks on the 900 miles between NASA’s Michoud facility in New Orleans to the shuttle’s Cape Kennedy launch site on the eastern Florida coast and made the trip 41 times between 1999 and 2011.

The long-serving barge is being converted to transport core components for NASA’s next-generation Space Launch System (SLS). The SLS will be the most powerful rocket ever built for deep space missions, including to an asteroid and ultimately Mars. Its hardware and components will be dramatically larger than the older space shuttle propulsion system and, to accommodate them, Conrad has lengthened the barge to 310 feet, replacing the vessel’s 115-foot center section with a new, 165-foot center section.

SLS will be largest, most powerful rocket ever built

“The Pegasus barge will play a crucial role in our ability to get the hardware from the Marshall Space Center, or Stennis, or Michoud to Kennedy for the launch, so it’s an absolutely critical role,” said Mr. Doering.

“From our beginnings in 1948 building wooden shrimp trawlers, to supporting our country’s space exploration program is humbling,” said Dan Conrad, Senior Vice President of Conrad Shipyard. “We must give appreciation to our valued workforce who have done a fantastic job of completing our scope on time, and most importantly safely.”