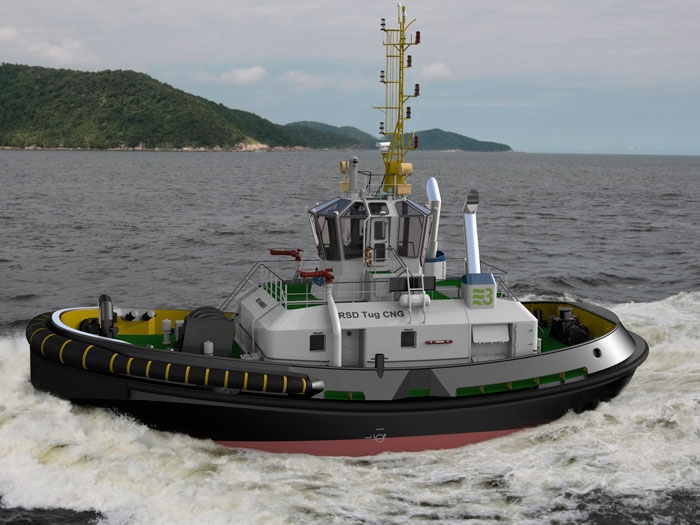 JUNE 27, 2014 — The first ever Reverse Stern Drive (RSD) tug to be fueled by compressed natural gas (CNG) tug is being brought to the market by Damen Shipyards, engine manufacturer MTU Friedrichshafen, and Denmark’s Svitzer, a member of the Maersk Group.

The official launch of the new CNG fueled RSD tug is planned for 2016. It will combine
high power with lower fuel costs and reduced emissions.

The tug will use a new 16-cylinder pure gas engine being developed by MTU, based on its proven workboat Series 4000 M63 diesel engine. It will be complemented with a multipoint gas injection system, a dynamic engine control and an optimized safety concept.

“We are developing our new gas Series in order to meet the extreme load profile of the tugboat. The acceleration will be comparable to the level of our diesel engines. Due to the clean combustion concept, compliance with IMO Tier 3 emission legislation will be ensured without the need of additional exhaust gas after treatment. The 2,000 kW MTU gas engine is characterized by high power density combined with low fuel consumption,” says Dr. Ulrich Dohle, CEO of MTU’s parent Rolls-Royce Power Systems AG.

“As a major harbor towage operator an important consideration is also that this tug will realise a considerable reduction in fuel costs and obviously fuel is a major cost concern for all operators,” says Svitzer CTO, Kristian Brauner. “As a market leader it is important for us to stay innovative with regards to performing safe and eco-friendly operations and to reduce emissions. Through the years we have already developed one version of the ECOtug and with this in mind, the choice to develop the new CNG tug is a natural step towards remaining an eco-conscious towage company.”