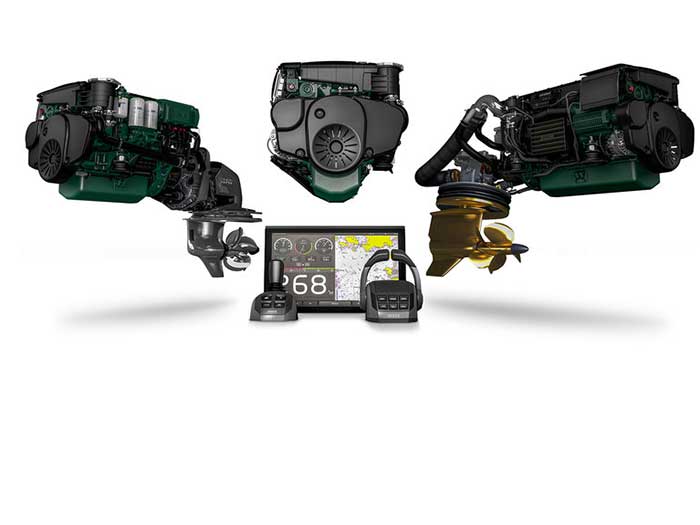 “The D4 and D6 series are proven workhorse engines with more than 100,000 deployed worldwide over the years,” said Ron Huibers, president of Volvo Penta of the Americas. “With this major upgrade project, the best has just gotten better. The new D4 and D6 are now delivering higher horsepower ratings, better fuel efficiency and lower maintenance cost, as well as Volvo Penta’s trademark torque across the full range of RPMs.”

Volvo Penta says its engineering team in Sweden put in more than 300,000 engineering manhours (equivalent to 50 people working full-time for three years), plus over 40,000 hours of testing for durability, reliability and performance. The result is 10 percent more power across the range, with maximum ratings of 320 hp for the D4 and 480 hp for the D6.

The cylinder head, piston and crankshaft are all stronger by design and new materials have been introduced such as a Diamond Like Carbon (DLC) coating on the piston pin to reduce friction and increase durability. T

Improvements have also been made to the IPS drive resulting in reduced service costs.

The DPI sterndrive has undergone a major transformation with a hydraulic clutch for smooth, silent shifting at slow engine speeds. Steer-by-wire functionality has been made standard for improved joystick docking, and the Dynamic Positioning System (DPS) provides automatic station-keeping.

Volvo Penta says the EVC2 serves as a gateway to the future of automated, connected and electric technologies. It =has an all-new operating system and modern electrical architecture.

With Volvo Penta’s new On-Board Service Assistant, operators can now check oil levels of the engine and IPS drive from the comfort of the helm station on the Glass Cockpit screen, eliminating the need for manual checks via dipstick. Service schedules are also visible through the platform.

Volvo Penta will show its new products in Booth 2101 at the International Work Boat Show Dec. 4-6.