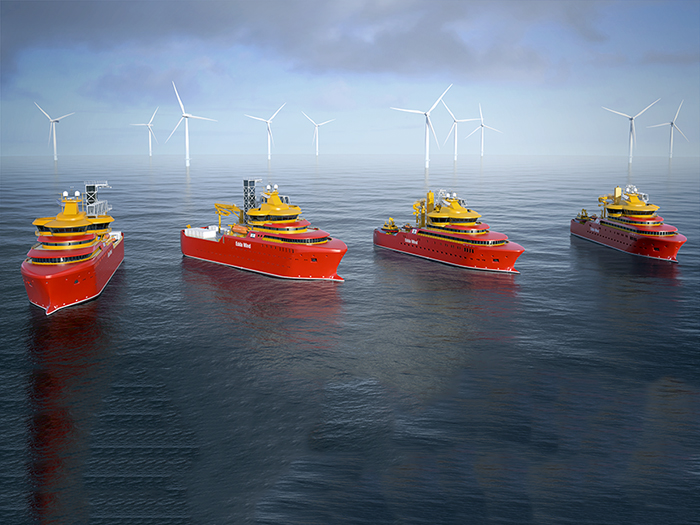 The vessels will be delivered with battery-hybrid technology that will see emission of greenhouse gases reduced by a minimum 30% and will also be prepared for future installation of zero emission hydrogen technology.

Among the advantages of the new eVSP are, in particular, a high efficiency and a reduction of complexity, as the permanent-magnet synchronous motor is already integrated in the propeller.

The best possible maneuvering performance is critical in the offshore wind support industry. Accurate dynamic positioning (DP) even under harsh environmental conditions, fast arrival departure from wind turbines, and safe and quick transfers of equipment and crew are key factors for smooth operation.

Comparative calculations have shown that a VSP-driven ship can maneuver safely at significantly higher wave heights, thus offering the operator an economic advantage. Due to the very fast and accurate thrust adjustment, the VSP can reduce the rolling motions of the ship by up to 70 percent, both when the ship is moving and when it is stationary at the wind turbine.

The electric Voith Schneider Propellers are characterized by very high efficiency and can be optimally integrated into the ship’s design. In model test comparisons with ducted screw propellers, the eVSP showed an average advantage of 15 percent lower power requirements in transit. The eVSP also delivers lower fuel consumption in dynamic positioning as it responds very rapidly to changing wind, wave and flow forces.

The eVSP is a new development from the Voith group. With this new type of gearless propeller, the permanent-magnet synchronous motor is directly integrated into the VSP. The drive system combines the technology of the VSP with more than a decade of electrical know-how gained wih the Voith Inline Thruster (VIT).

Advantages claimed for the eVSP include an increase in efficiency due to the elimination of gears and the reduction of bearing points, plus a very high motor efficiency, including in the partial load range, which is particularly relevant in the offshore sector. In addition, no separate electric motor is required and shaft lines are also eliminated.