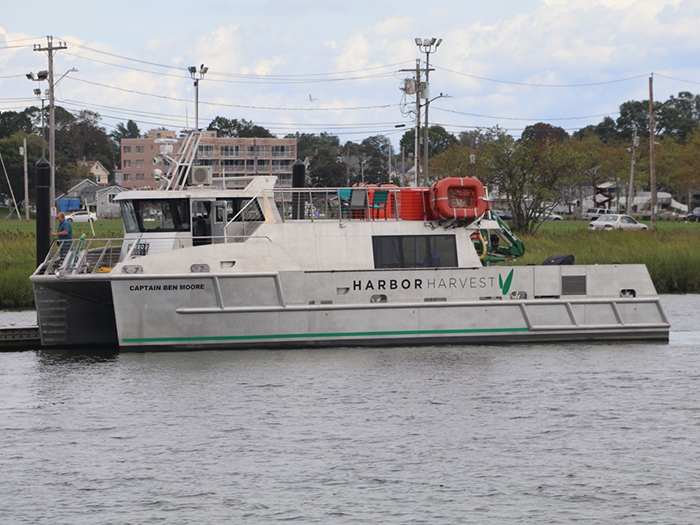 The first hybrid cargo vessel to be built in the U.S., the Captain Ben Moore, the third in a series of 65 foot hybrid catamarans built by Derecktor Shipyards, Mamaroneck, N.Y., is about to notch up another first. Its operator, Norwalk, Conn., based First Harvest Navigation, has selected Boston-based Sea Machines Robotics to add autonomous functionality to the vessel.

Installation of the SM300 aboard the vessel will take place in November 2020. Once complete, vessel’s intelligent capabilities will offer First Harvest Navigation redundancy and flexibility for crew shifts, with the capability to autonomously command Captain Ben Moore from the company’s land-based control station.

Captain Ben Moore has been designed to operate across Long Island Sound between Norwalk and Huntington, N.Y., to deliver food and other cargo faster, more reliably and more affordably than truck transportation to East Norwalk’s Harbor Harvest food market, while also reducing regional highway congestion. Comparable trucking services require a near nine-hour round trip to deliver on the route. First Harvest Navigation completes the terminal-to-terminal voyage in approximately 35 to 45 minutes.

“Part of our transportation goals are to develop autonomous, hybrid catamarans to move farm products across Long Island Sound. The Sea Machines SM300 autonomous navigation system will help us achieve many of our goals because it enables shipping movements to be completed very reliably and efficiently in a seamless and sustainable delivery system,” said Bob Kunkel, president, First Harvest Navigation. “Shifting cargo from streets and highways also alleviates the growing congestion, lowers emissions and reestablishes our waterways as a viable and cost-efficient alternative to land-based transport.”

“Sea Machines and First Harvest Navigation are aligned in our commitments to innovation to bolster the U.S. marine highway system and in our support of family farms,” said Michael G. Johnson, founder and CEO, Sea Machines. “The SM300 ensures predictable and performance-based vessel operations while providing a 24/7 crew support system that is always on watch. It often takes determined entrepreneurial leaders like First Harvest Navigation to move an industry into new waters and Sea Machines is pleased to support the achievement of their goals.”

The hybrid vessel can carry approximately 28 pallets, 10 of which are positioned in a fully refrigerated and protected walk-in space. The remaining cargo spaces are open and covered according to customer requirements.