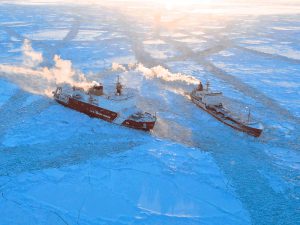 It was a nasty winter, even by Alaskan standards. The city of Nome, Alaska was in trouble.  A late November storm blocked a scheduled shipment and the city was running out of fuel.  In an Arctic winter, fuel is as precious as blood.  It powers more than cars and trucks, it runs generators to light up the 24 hours of darkness and it burns in boilers for heat when the outside temperatures regularly hit -50 degrees.  Without fuel, all human life stops; and Nome’s tanks were running dry.  The solution to the crisis lay in the belly of a Russian ice-strengthened tanker sailing just offshore.  The problem was that her cargo of life-sustaining gas and diesel was loaded in Dutch Harbor Alaska, and a U.S. law designed to protect domestic shipbuilding was preventing her from completing the mission.  Recognizing the urgency, Secretary of Homeland Security, Janet Napolitano, issued a one-time waiver of the Jones Act and the Renda steamed into Nome Harbor to deliver the fuel.

As changes in Arctic continue to unfold, incidents such as the one in Nome will become more common.  In addition, the pace of change in Arctic has found the U.S. unprepared to assert her claims and to defend fragile ecosystems and populations.  The Nome incident illustrates a stark choice for the U.S.: change how the country protects its domestic shipbuilding, or cede the Arctic to its geopolitical rivals.

The Jones Act requires that any ship carrying passengers or cargo between two U.S. ports must be built in the U.S., crewed by U.S. nationals, and owned by a U.S. company.  The Act dates back to the 1920’s but the idea of protecting a domestic shipbuilding industry from foreign competition is as old as the country itself. The First Congress of the United States levied heavy tariffs on goods delivered on foreign ships.  The Act serves that important role today; however, the economic reality is that Jones Act compliant ships are expensive to build and expensive to operate.  So to maximize profits, large ships in the international trade are flagged in countries with favorable laws and tax treatment.  Such “flags of convenience” create strange outcomes as cruise ships that pick up vacationers in Miami must first stop somewhere outside of the U.S. before discharging their passengers.  Foreign flagged tankers, loading crude in Valdez may take that crude to a foreign port where it is pumped ashore, modified slightly, then reloaded on to the same ship before that ship sets sail for a U.S. refinery.

Opponents of the Jones Act point out the inefficiencies created when non-compliant vessels seek to skirt the law.  They argue that the trade protection measure makes coastwise shipping prohibitively expensive as shipbuilders in the U.S. must operate under more expensive environmental and labor regulations.  Similarly, the U.S. ownership requirement cuts off sources of capital to build those ships.  Without the Jones Act, the argument goes, we could use international competition and realize benefits and efficiencies of moving freight over water.  For example, we could put containers on barges that service coastal cities, thereby removing thousands of trucks from the already choked and crumbling interstate highways.

Proponents of the Act cite jobs and national security interests.  During World War II the U.S. shipbuilding industry saved the world from fascism by building Liberty Ships faster than German submarines could sink them.  Today, the market for Jones Act compliant vessels supports thousands of good paying jobs and preserves skills that would desperately be needed should the world face a similar crisis.  The decline in domestic manufacturing under the auspices of free trade serve as a warning to those looking to open U.S. shipbuilding to foreign competition.

The Arctic presents a different problem.  As the ice recedes, human demands in the Arctic will increase.  Just this year, 1,000 passengers aboard the cruise ship Crystal Serenity sambaed and bunny hopped their way through the once impassable Northwest Passage.   As a result of increased economic activity, settlements in the Arctic will grow.  More people in the Arctic means more demand for ice class ships to resupply villages and outposts.  More shipping also means increased demand for search and rescue and spill response.  As demand for icebreakers and ice class ships increases, there are few Jones-Act certified ships to fill the need.  In contrast, countries such as Finland have an excess of icebreaker capacity.  Those ships, however, cannot operate between U.S. ports in the absence of a Jones Act waiver from the Department of Homeland Security.

In addition to support for economic activity, presence in the Arctic is critical for political reasons.  Conditions in the Arctic are changing faster than most expected and wherever the ice recedes, it leaves behind a geopolitical vacuum.  As the ice pulls back from the shore, it will expose trillions of dollars in natural resources.  More importantly, it will uncover fragile and delicate ecosystems and leave indigenous populations exposed to potential exploitation.  Russia has already staked its claim to a vast undersea territory stretching almost to the North Pole.  In the last few years, Russia has been quietly rebuilding its fleet of Soviet era icebreakers.  Today, Russia has scores of ice class ships, six nuclear powered icebreakers, and three more heavy crushers on their way.  China, with no territory in the arctic, has two icebreakers with a third on the way.  The United States, a country with the world’s most powerful and well equipped military, has one heavy icebreaker, and it is 40 years old.  Congress has allocated funds for a second ship, but construction will not start until 2020 and the ship will not see ice until 2025.  Protection of the environment and native people in the Arctic will require a U.S. presence and a U.S. presence will require icebreakers now.

Typical Jones Act problems involve competition between foreign and U.S. flagged ships.  But with little or no U.S. ships to fill the need, the Jones Act forces a choice between using a foreign flagged vessel or nothing at all.  As the situation in Nome demonstrated, that is not a choice when lives, the environment, or a critical national interest is at stake.  The current administration can fix this. The Secretary of Homeland Security, using executive authority, can and should grant a temporary waiver for all ice class vessels operating from the Aleutian Islands in the south to the Canadian border in the north and in all U.S. points above the Arctic Circle, until such time as an equivalent Jones Act compliant vessel becomes available.  Such a rule would allow the U.S. to immediately defend her geopolitical interests by freeing up the one available icebreaker.  While the waiver is in place, existing foreign vessels could develop and test markets for commercial shipping with ice breaking capabilities.  If it appears the market will bear the increased cost of a U.S. flagged ship providing those services, U.S. shipbuilders will build a ship and enter the market.  When the U.S. ships move in, the waiver is lifted and the U.S. will protect that market under existing law.  In this way, the rule would actually promote domestic shipbuilding by allowing other countries to highlight areas for growth while minimizing risks.  Such a rule would also encourage efficiency and innovation without compromising or threatening existing jobs.

As President Lincoln said in his 1862 address to Congress “the dogmas of the past are inadequate to the stormy present.” The Arctic presents opportunities and challenges not seen by western countries since the days of Columbus.  In times of crisis, we can, and should, look critically upon institutions fostered in a different time and for a different reason.  The Secretary of Homeland Security recognized this crisis and granted a waiver for Nome.  The Secretary should now do the same for the rest of the Arctic.