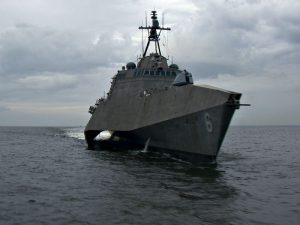 Austal gets $13.9 million to prep LCS 6 for shock trials

They will be the first littoral combat ships to undergo these trials, though DOT&E had tried hard to impose them on earlier ships in the two series. The trials are not quite a deliberate attempt to blow up a ship, but they come pretty close to it.

Yesterday, the Pentagon announced Independence class shipbuilder Austal USA, Mobile, AL, was awarded a $13,398,209 cost-plus-award-fee order to provide all supplies, services, labor and material in support of what it calls the  pre-shock trials emergent availability for PCU Jackson (LCS 6).

The order is for execution of LCS 6’s emergent availability to be conducted prior to full ship shock trials.
Efforts under the work will include program management, test plan and integrated master schedule development, and work package execution and testing.  The work will be performed in Mayport, FL, and is expected to be completed by June 2016.

The Supervisor of Shipbuilding, Conversion, and Repair Gulf Coast, Pascagoula, Mississippi, is the contracting activity.

The U.K. continues to be a key growth market for Carnival Corporation declared Chairman & CEO Micky Arison as the cruise giant revealed that it has contracted with shipbuilder Fincantieri to construct