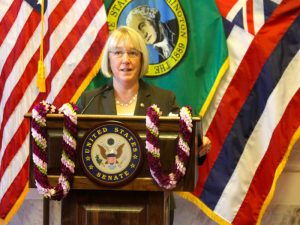 Maritime and Senate leaders gathered on Capitol Hill to honor Senator Murray as the first recipient of the Daniel K. Inouye Maritime Guardian award— given to a recipient who embodies strong leadership and commitment to the U.S. maritime industry.

The award was presented by Irene Hirano Inouye, widow of Sen. Inouye, to Sen. Murray, whose state is home to major ports, a vibrant American maritime industry, and a significant international shipping industry.

“We’d like to thank Sen. Murray for her vocal support and demonstrated commitment to the American maritime industry,” said Jennifer Sabas, Director of the Daniel K. Inouye Institute. “Sen. Murray mirrors the legacy of Sen. Inouye for her commitment to the success, safety, innovation and progress of this industry.”

“Senator Inouye was and always will be a shining example of what it means to be a strong leader for the U.S. maritime industry. His work has been immensely important to my home state of Washington,” said Senator Murray. “I’m honored to receive this award in the name of a true American maritime advocate. As Senator Inouye did during his tenure, I will continue to work with members of Congress to support legislation that sustains the strength of this vital industry while honoring the maritime initiatives Senator Inouye worked tirelessly to uphold.”

“Dan was widely respected for his moral courage and his commitment to working in a bipartisan fashion,” said Irene Hirano Inouye. “It is with full confidence I can say Sen. Murray exemplifies that same commitment to the Merchant Marine and therefore it is with pride of my husband’s memory that she was selected for this award.”

Prior to his death, Sen. Daniel K. Inouye had a distinguished tenure of more than 49 years of serving Hawaii in the U.S. Senate, the longest serving member to date. As president pro tempore of the Senate from 2010-2012 — third in line of presidential succession — Sen. Inouye was the highest-ranking public official of Asian descent in United States history.

For his heroic actions as a member of the famed 442nd Regimental Combat Team—resulting in the loss of his right arm—the World War II veteran ultimately earned the nation’s highest award for military valor, the Medal of Honor.

The Daniel K. Inouye Institute was established in 2013 to honor his legacy.

The Daniel K. Inouye Maritime Guardian award is modeled after one of the first Hawaiian weapons ever seen in the new world. Collected on one of Captain Cook’s journeys into the Pacific, it was made of wood and imbedded with teeth from a great white shark. Called the “lei o mano,” it was reserved for the warrior who was responsible for protecting the maritime resources and for ensuring safe passage on the seas. Over his years in the Congress, Sen. Dan Inouye received the “lei o mano” for his relentless efforts, and through this award, his legacy and commitment to a strong U.S. maritime sector is passed forward.