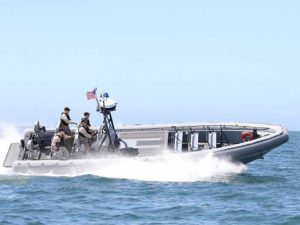 AUGUST 5, 2016  — Willard Marine says it has executed a licensing agreement with the U.S. Navy that will see a Willard Marine boat design serve as the guideline for the Navy’s 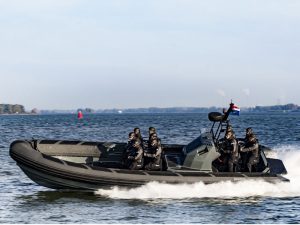 “This is not your average RHIB,” says Roel Foolen, the shipyard’s Newbuild Project Manager. “For starters, it’s Lloyds approved. The hull is made of glass reinforced epoxy as opposed to polyester and provided with Lloyd’s approved closed cell, foam core.”

“Further to this, we are also able to provide training in its use,” adds Mr. Foolen. “Damen has many years’ experience in building boats for navies and other defence and security bodies.”

Damen’s use of epoxy for the hull will see the RHIB 1050 produced at the group’s specialist composites yard in Antalya, Turkey.

“We’ve aimed to cover every detail – for example including steps to facilitate easy, fast exit of the RHIB in boarding ops and integration of hoisting eyes into the bollards, simultaneously removing a trip hazard and taking advantage of every available bit of space,” says Mr. Foolen.

“Doing this allows us to combine the console and the engines into a single, space saving unit,” says Mr. Foolen.” Usually this would not be possible as such a unit would impede access to the fore of the vessel. However, with a section of tubing removed, there is still space for on board personnel to pass safely and comfortably fore to aft.”

Similarly, the entire console unit is hinged at the aft so that it can be very easily moved clear when access is necessary to the RHIB’s two 370 hp Volvo Penta engines. The mast is also hinged so that it can be quickly folded away for transport height.

“As well as easy maintenance, the RHIB 1050 is also low maintenance,” says Mr Foolen. “We’ve used high-end materials and taken every step to ensure components are protected. Console instrumentation is located behind a heated, watertight window for example. And all electrics are housed in a dedicated, heated and ventilated compartment inside the dry storage area.”

“During seatrials, the handling, maneuverability and balance have proven to be excellent,” says Mr. Foolen. “It’s very safe also, very forgiving and perfect in rough, harsh water. She’s quick too – able to sail at speeds of over 50 knots.” 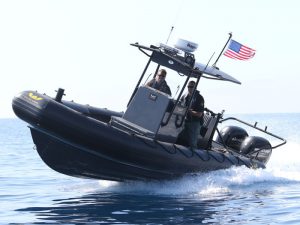 The nearly 24 foot long and 9-foot wide RHIB is designed with a deep-V hull for maximum stability in the roughest sea conditions, and delivers 300 horsepower from twin 150 Mercury four-stroke engines.

The 40-ounce polyurethane WING inflatable collar has reinforced rub-strakes to reduce risk of boat damage upon boarding and stability during weight shifts.

For protection from the elements, there is an aluminum T-top over the ergonomic center console, which features cup holders, a weather-protected laptop compartment, and an aft-folding windscreen that is safe and convenient for one-person crews

Willard Marine designed the Mission Pro 730 based on the 7-meter RHIB it has provided to the U.S. Navy for 35 years.

Interviews with law enforcement and first responder professionals underscored the need for a durable vessel that would withstand the test of time and lower the total cost of ownership, which is what the Navy and other military branches have required of Willard Marine for decades.

“For 35 years, Willard Marine has built strong, dependable vessels for American and international militaries around the world,” said Ulrich Gottschling, president of Willard Marine. “We are proud to offer first response professionals a genuine mission-proven boat like the Mission Pro 730 that they can depend on for optimum performance and minimal maintenance year after year.”

Built to USCG and ABYC specification standards, the Mission Pro 730 can be customized to an agency’s unique mission requirements and performance specifications.

Willard Marine is the exclusive builder of commercial vessels originally designed by SeaArk Marine and Crystaliner. Based in California with facilities in Maryland and Virginia, Willard Marine is ISO 9001:2008 certified and the sole American manufacturer of SOLAS rescue boats.