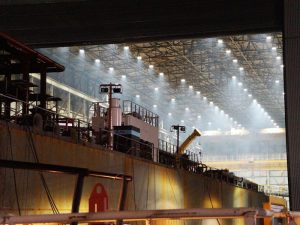 Located on the Lake Erie shore, the over 200,000 sq. ft. shipyard facility has a 92-foot ceiling height on the main floor, plus a 125-foot high ceiling over a portion of the massive graving dock, one of only two on the Great Lakes able to accommodate 1,000-foot self-unloading vessels for construction, repair, conversion, repowering and maintenance.

In addition to the notoriously short life of the metal halide lamps, the damp, harsh, high-vibration environment inside the open air facility took a major toll on both bulbs and ballasts. And the exceptional ceiling height was a major obstacle to easily changing bulbs and fixtures.

Without proper lighting, the sheer size of Donjon’s facilities made them appear cavernous and dark even on the brightest, sunny days. The lackluster color rendering of the metal halides even contributed to visibility issues with their unnatural orange glow. And, when it came time to turn on the lights at the start of their 24-hour, 5 day-a-week operation, the metal halides took nearly 20 minutes to come up to full output.

“The lighting was not sufficient enough to fully light the facility. There were places in the building where we had to use a flashlight, even when we weren’t inside a ballast tank,” said Caleb Hoffman, Electrical Lead Man. “A flashlight was on everyone’s required tool list. It was difficult to read a tape measure without one, and accuracy in measurement is very important in our work.”

Aiming to end its lighting woes with an upgrade, Donjon began looking at vendor proposals. It didn’t take long to realize that LED was the way to go and Donjon opted to replace the metal halide fixtures with  60,000 lumen Vigilant High Bay LED fixtures from Dialight plc, an international market leader in LED lighting with North American headquarters in Farmingdale, NJ.

“We assumed LED is the latest and greatest technology, giving us the best bang for the buck,” Mr. Hoffman said. “We chose Dialight because it best suited our application, and the warranty was a huge factor.”

The new Vigilants are so bright thar Donjon was able to eliminate two-thirds of the fixtures in the facility, replacing 266 metal halides with  79 Dialight 60,000 lumen Vigilants.

At roughly half the weight of conventional fixtures, the Dialight Vigilants were easy for Donjon’s in-house electrical crew to install on the existing circuits. With an ambient temperature rating of -40°F to + 149°F and high-durability fixture design, the new Vigilants can easily tolerate the harsh Lake Erie weather.

The entire fixture is backed by Dialight’s 10-year, full-performance warranty, so Donjon is now guaranteed to have ample lighting with zero maintenance for a decade or more.

The clear, bright white output of the Dialight LEDs makes a difference in visibility that is like “night and day” compared to the old fixtures, according to Donjon staff. Flashlights are no longer required on the shop floor, even in the graving dock where the lights are 125-feet off the ground. The high-performance optics deliver directional light exactly where it’s needed, with no dark spots or harsh glare.

“We compared three different manufacturers, and Dialight was hands-down the best fit for our application,” Mr. Hoffman said. “One other company promised more hours on the fixtures, but couldn’t back it with a warranty. The 10-year warranty, ease of installation and energy efficiency―Dialight offered the whole package that was better for our situation.”