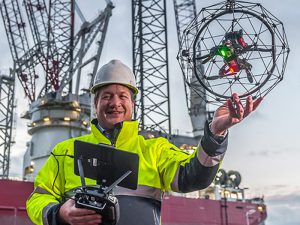 NOVEMBER 30, 2017 — Delft, Netherlands, based drone inspection service provider Robotics In Maintenance Strategies BV (RIMS) has been certified as a “Recognized External Specialist” by classification societies ABS and RINA, for

ABS has also held its position as the most favored classification society for new construction, a standing it has held for most of the last three years. The current order book is comprises 2,384 vessels aggregating 50.95 million gt.

“The continued strength of the newbuilding market, given the current global economic uncertainty, is surprising,” says ABS Chairman and CEO Robert D. Somerville. “New orders to ABS class continue to offset the uncommonly high level of deliveries providing a consistently high demand for our engineering and survey services and giving us the youngest fleet profile in our history.” More than 67 percent of the in-service ABS-classed fleet is now ten years of age or less.

Mr. Somerville says he believes that “superior service will remain the principle differentiator between the leading class societies, with ABS setting the standard.”

The latest fleet statistics show that ABS continues to hold the leading market share for newbuildings on order in both Korea and China, the world’s top two shipbuilding nations. The society is equally successful with shipowners with its 30 percent share of all Greek controlled tonnage on order clearly demonstrating its success in this most demanding market.

The recent establishment of a fifth operating division for Greater China, responsible for administering the society’s activities in the People’s Republic of China, Hong Kong SAR and Taiwan is the latest demonstration of the ABS commitment to superior service according to Mr. Somerville.