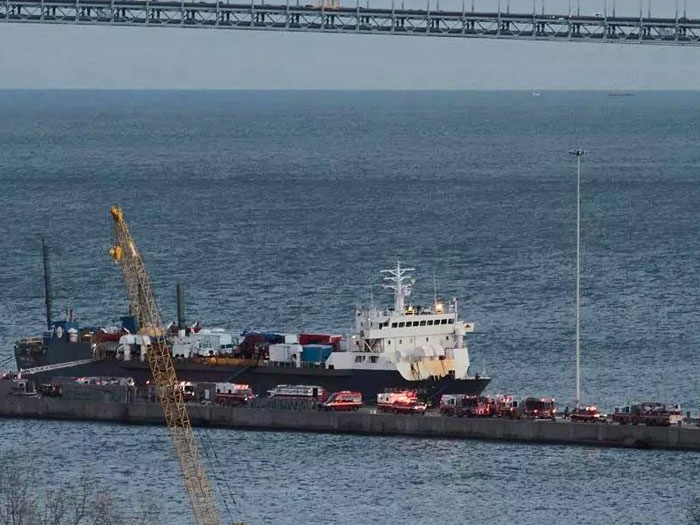 NYC Firewire posted this picture of the FDNY response, with the comment "It's under control"

MARCH 19, 2015 — The U.S. Coast Guard and the New York City police and fire departments were yesterday working together, along with the ship’s owners to extinguish a fire aboard the 360 ft roll-on/roll-off ship MV Grey Shark at Homeport Pier in Staten Island, New York.

The 1980-built, Panamanian flagged Grey Shark is owned and operated by Devon Shipping, Inc., Far Rockaway, NY, which specializes in shipping cars and trucks to Hawaii, and appears to be the company’s only ship. According to the Equasis data base, it is classed with Panama based Naval Classification Bureau, which is not an IACS member.

According to Equasis, when inspected by the Coast Guard in New York on February 24, the ship had a total of 12 deficiencies that included fire safety deficiencies relating to the fire pumps and main vertical zone plus operational deficiences relating to fire fighting equipment appliances. An inspection the following day found no deficiencies.

The ship departed New York on Wednesday, March 11, 2015, bound for the Caribbean Sea with 13 crew members aboard.

On Saturday, one of the vessel’s two engines had ceased to operate, causing the master of the ship to make the decision to return to New York for repairs.

On Sunday, at approximately 4 p.m., the vessel experienced difficulty with its second engine that caused a fire to break out the cargo spaces. Power was subsequently restored to one of the vessel’s engines and no injuries have been reported. The fire was contained by the on-board firefighting system but has continued to smolder since the initial ignition.

The Coast Guard Cutter Seneca arrived on scene to provide assistance alongside a commercial tug from McAllister Towing. By the early morning on Monday, both the Seneca crew and the tug were on scene, approximately 180 miles southeast of Cape May, NJ.

A tow was rigged for the Grey Shark so the damaged vessel could be returned to New York for inspection. A second tug was also dispatched to assist in the tow.

On Wednesday morning, the Grey Shark was brought to Homeport Pier in Staten Island so that FDNY crews could board the vessel and control the smoldering fire.

FDNY crews immediately began operations to assess and address any remaining fires on board the vessel.

A 150-yard safety zone on the land and in the water surrounding both the vessel and Homeport Pier has been established and will be strictly enforced by the Coast Guard and NYPD.

The Coast Guard said yesterday that once FDNY officials had declared the fire to be completely extinguished, the investigation into the cause of both the fire and the loss of engine power will begin.