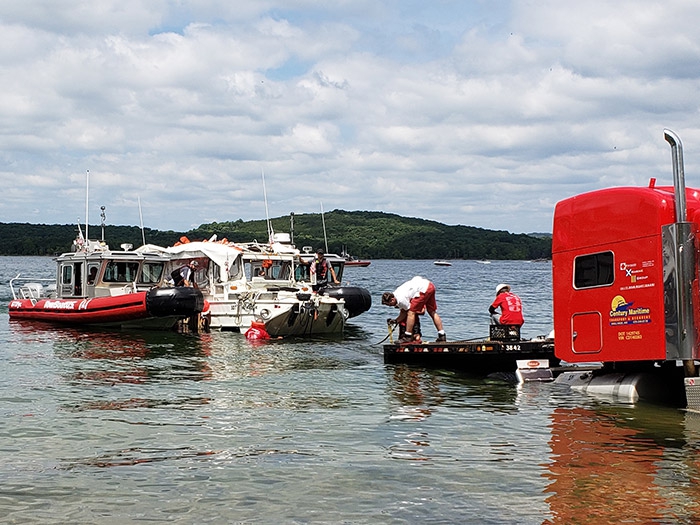 Stretch Duck 7 is loaded onto a flatbed trailer to be transported to a secure facility after being raised from Table Rock Lake in Branson, Missouri, July 23, 2018

JULY 29, 2018 — The National Transportation Safety Board said Friday that it had completed of the initial review of the digital video recorder system recovered from the DUKW Stretch Duck 07 that sank July 19 near Branson, Missouri.

The Ride the Ducks, Branson amphibious vehicle had 29 passengers and two crew members aboard for a tour when weather conditions deteriorated on Table Rock Lake. One crewmember and 16 passengers died in the accident.

The NTSB’s initial review of the recorder provides the following information which is preliminary and will be supplemented or corrected during the investigation.

The times presented here are as recorded by the DVR and have not yet been validated against local time.

The information does not contain analysis. As such, says NTSB, no conclusions regarding the cause of the accident should be made from this preliminary information.

The audio quality varies widely throughout the recording, affecting the intelligibility of what is spoken.

About 18:27:08. The captain and driver boarded the previously empty vehicle. The driver sat in the driver’s seat and the captain sat in the side-facing seat to the right of the driver. (The captain operates the duck on water and the driver operates duck on the road.)

About 18:28:00. The crew was told to take the water portion of the tour first, by an individual who briefly stepped onto the rear of the vehicle.

About 18:29:13. As the passengers were loading, the captain made a verbal reference to looking at the weather radar prior to the trip.

About 18:33:10. The driver stated a passenger count of 29 and shortly after, the vehicle departed the terminal facility. The captain narrated the tour while the vehicle was in motion.

About 18:55:20. The captain announced to the passengers that they would be entering the water. The boat entered the water. The water appeared calm at this time.

Between about 18:56:22 and 19:00:38. The captain allowed four different children to sit in the driver’s seat, while he observed and assisted.

About 19:00:25. Whitecaps rapidly appeared on the water and winds increased.

About 19:00:42. The captain returned to the driver’s seat. The driver lowered both the port and starboard clear plastic side curtains.

About 19:03:15. The captain made a handheld radio call, the content of which is currently unintelligible.

About 19:04:15. An electronic tone associated with the bilge alarm activated.

About 19:05:21. The captain reached downward with his right hand and the bilge alarm ceases.

About 19:05:40. The captain made a handheld radio call, the content of which is currently unintelligible.

In the final minutes of the recording. Water occasionally splashes inside the vehicle’s passenger compartment. (The low frame rate and relatively low resolution make it very difficult to be more precise in the preliminary review.)

About 19:07:26. An electronic tone associated with the bilge alarm activated.

19:08:27. The inward-facing recording ended, while the vehicle was still on the surface of the water.

An NTSB recorder group consisting of technical experts from the NTSB and parties to the investigation will convene at NTSB headquarters to begin validating the recorded data and developing a detailed transcript of the sequence of events. Parties to the NTSB’s investigation are the U.S. Coast Guard, Missouri State Police Highway Patrol, Ride the Ducks, Branson and the National Weather Service.