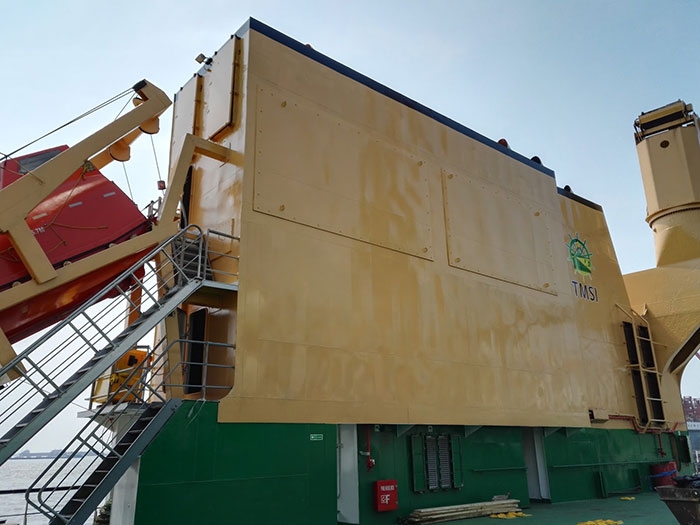 MAY 13, 2016 — In a breakthrough for a promising new technology, China’s Cosco Nantong Shipyard has completed the first shipboard installation of an Ionada Membrane Scrubber exhaust gas cleaning system (EGCS) aboard ship.

The unit has been installed on a 4,850 dwt, 2000 built, Barbados-flag RO/RO carrier, the Nolhanava (ex-Shamrock), owned by MG Management SAS of St Pierre & Miquelon.

The ceramic membrane scrubber technology used has been developed as a result of research into  zero discharge exhaust gas scrubbing technology led by Edoardo Panziera undertaken by the National Research Council of Canada, Transport Canada, the University of Waterloo and Ryerson University.  The results were promising enough to attract the first angel investor which led to the spin out and founding of Ionada Incorporated, whose CEO is Mr. Panziera, to commercialize the technology.

The name is a portmanteau of the words “ion absorption desorption abatement.”What that translates into is an ECGS that uses the high efficiency, reliability, and low energy consumption of membrane technology to create a scrubber claimed to be smaller, and more energy efficient than competitive wet scrubbers.

Other advantages claimed include:

Cosco Nantong Shipyard says its installation has been highly-rated by the officials and experts. The shipyard notes that China has published a marine (vessel) emission control area implementation plan in the Pearl River, Yangtze River Delta and Jing-jin-jiBohai Sea Rim regions which established three ECAs. The first to be implemented will be in the Yangtze River Delta with the five core ports Shanghai, Ningbo, Zhoushan, Suzhou and Nantong taking the first steps last month.

To take advantage of the ship conversion opportunities this opens up, Cosco Shipyard has reached a cooperation agreement with Jiangsu Ionada Environmental Protection Technology Co. that gives it a priority right to use the ceramic membrane scrubber technology.