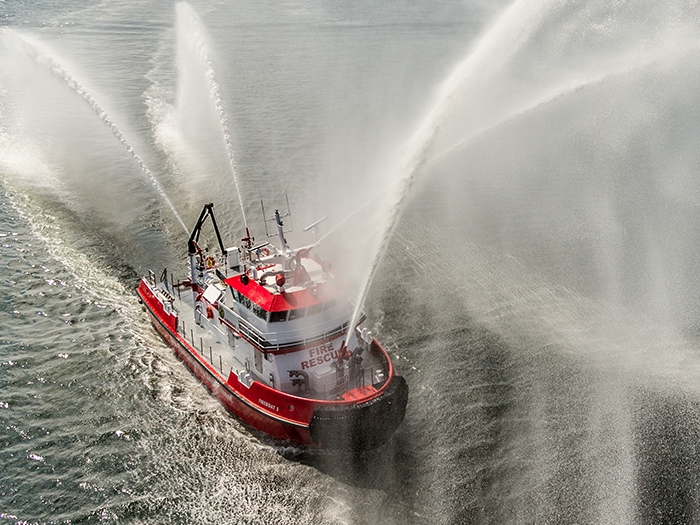 Designed by Jensen Maritime, it is the first fireboat in 61 years to join San Francisco’s fleet.

The vessel is an exceptional firefighting tool that can also serve as a mobile pumping station capable of pumping millions of gallons of water directly from San Francisco Bay into the City’s Auxiliary Water System. This critical feature will keep fire hoses flowing in the event an earthquake damages San Francisco’s water mains.

“Construction of this fireboat is a source of pride for all concerned,” said Keith Whittemore, Vigor Executive Vice President of Business Development. “It’s a complex vessel with multiple modes of operation and different systems that need to communicate with each other seamlessly to give the City’s firefighters the best possible tool for the future. Vigor, Jensen and many great suppliers did a great job pulling together as a team to make that intricate systems integration happen within the delivery schedule.”

Cummins was key to the most important feature of the fireboat, its critical pumping and propulsion power. The vessel features three QSK19-M US EPA Tier 3 engines that each provide 750 hp @ 1,800 RPM pumping power to a 6,000 gpm Counterfire ESF 300-550— a total of 18,000 gpm of flow with all three engines in pumping mode. Power is transmitted to the pumps via three Logan LC318 SAE #0 air actuated clutches and Elbe cardan shafts with a Centa Centaflex-R flywheel mounted torsional coupling.

In addition to providing pumping power, the two outboard engines also provide 591hp @ 1800 RPM for propulsion operations from the front of the engine. Propulsion power is transmitted through a Centa CX-56 torsional coupling and a Reintjes WAF 364 reduction gear provided by Karl Senner.

Special attention was paid to noise and vibration reduction by the designers. All three engines are mounted on Christie & Grey TSC T-10 vibration isolators resulting in excellent performance.

“It truly was a team effort to engineer solutions for this impressive vessel,” says Joe Tobin, Cummins Project and Commissioning Lead. “The suppliers brought the best products and people together.”

The new fireboat, which has not yet been named, will be christened on October 17 which also happens to be the anniversary of the 1989 Loma Prieta earthquake — which burst the domestic water lines beneath San Francisco. Should this happen again, Fireboat 3 (as it is currently called) will be there to ensure the Auxiliary Water System has the water needed to protect the City’s citizens and property.