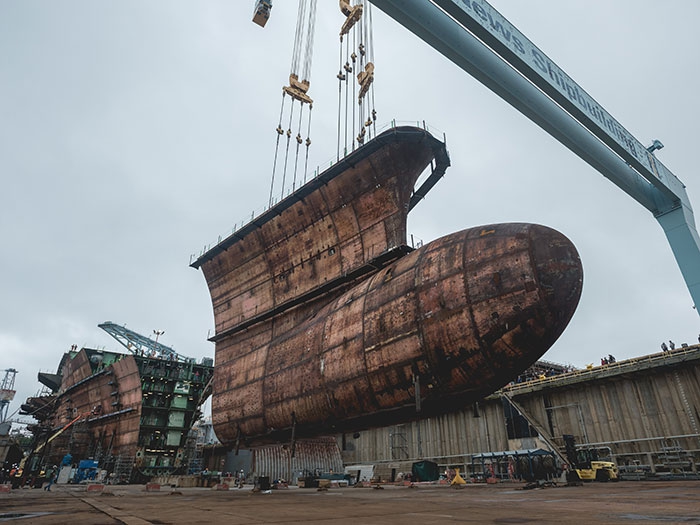 One of the largest superlift that will make up the aircraft carrier John F. Kennedy (CVN 79), the lower bow unit completes the underwater hull of the ship

OCTOBER 3, 2018 — Huntington Ingalls Industries’ (NYSE:HII) says that an improved build strategy, which includes the use of digital technologies to improve efficiencies, has allowed its Newport News Shipbuilding division to reach another milestone in the construction of the aircraft carrier John F. Kennedy (CVN 79).

On September 28, the company lowered the final piece of the ship’s underwater hull into place. The joining of the 726-ton lower bow, which includes the distinctive bulbous feature, completes the section of the ship below the waterline and extends the nuclear-powered warship an additional 122 feet.

At 1,096 feet, Kennedy‘s hull is longer than three football fields.

The lower bow is more than 64 feet tall and 54 feet wide and is one of the heaviest planned steel structures, known as superlifts, to be placed on the ship. The unit consists of 84,000 square feet of tanks and chain lockers.

“This superlift completes the underwater hull of the ship and completes the erection of all of the ship’s structures from main deck down,” said Lucas Hicks, Newport News’ vice president, CVN 79 carrier construction. “The lower bow superlift is another good example of how the use of technology is driving how we are building the next generation aircraft carrier.

“This brings us one step closer to launching the ship next year,” Hicks said.

More than 3,000 shipbuilders and 2,000 suppliers from across the country are supporting the construction of Kennedy.