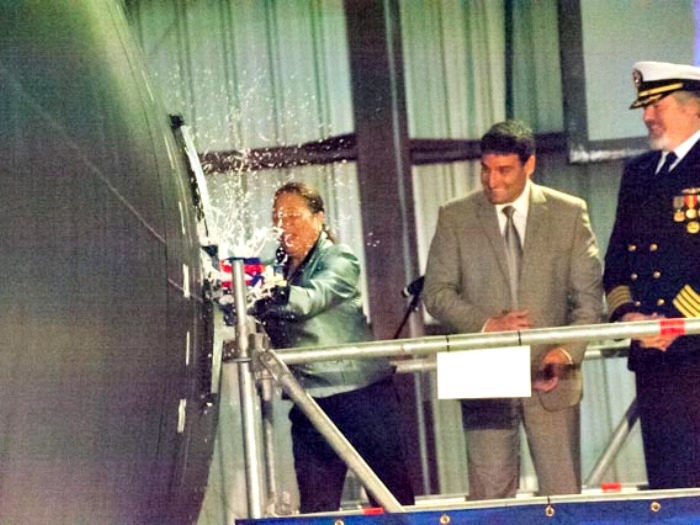 The 338-foot (103-meter) catamaran vessel was named Fall River by Secretary of the Navy Ray Mabus, after the tenth largest city in the state of Massachusetts.  According to Secretary Mabus, “the Fall River represents the physical embodiment of the city of Fall River’s patriotic spirit.”

The ship’s sponsor, Mrs. Diane Bemus Patrick, the First Lady of Massachusetts, has her own record of excellence and distinguished professional and public service. A lawyer, teacher, mother and active member of her community, Mrs. Patrick has extensive experience in many walks of life.

Throughout her life and professional career, Diane Patrick has dedicated herself to various communities, and has served on the Boards of several distinguished civic and non-profit organizations.  Diane and Deval Patrick have been married for over two decades and have two daughters, Sarah and Katherine.

Over 400 naval and shipyard guests attended the ceremony, which was held underneath the ship, between the iconic twin hulls of the USNS Fall River. The Honorable Ray Mabus, Secretary of the Navy, was the principal speaker at the event.

Austal USA President, Craig Perciavalle, praised the ship, saying, “Fall River is a revolutionary and cost-effective new platform with cutting edge technology, bringing an unprecedented level of flexibility, mobility, volume, efficiency and support to our combatant commanders and nation.”  He also praised the shipbuilders, saying “this is a great ship, built by great Navy shipbuilders, master craftsman who work so hard to bring this revolutionary ship to life.  You should take pride in this day, in the product you build, and in the service you’re providing this great nation.  ”

Austal has delivered two of the 10 JHSVs, and eight 127-meter Independence-variant LCS class ships, six of which are a part of a 10-ship, $3.5 billion contract.

Three JHSVs and four LCSs are currently under construction in Austal’s Mobile, AL shipyard. Austal will begin production of one more ship in each program before the end of this month.