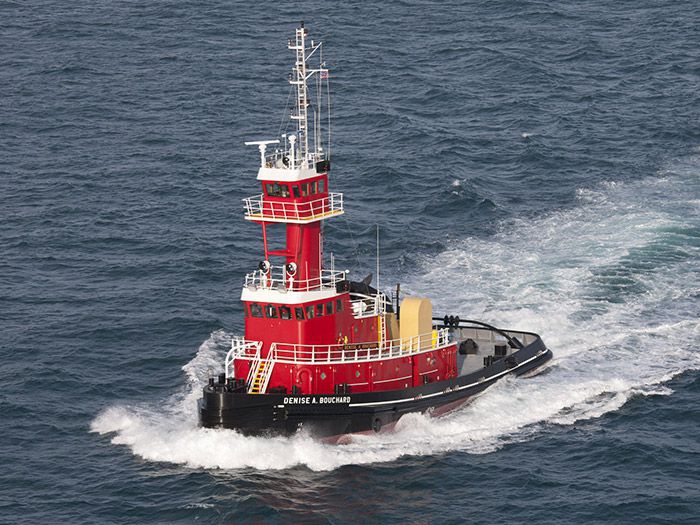 ATB tug ordered at VT Halter Marine will be a sister vessel to the M/V Denise A. Bouchard pictured here

OCTOBER 30, 2018 – Singapore’s ST Engineering reports that in the third quarter of 2018 its marine sector secured about S$431million worth of contracts including options for its shipbuilding business, as well as the ship and rig repair segments for progressive deliveries at its yards in Singapore and the U.S.

ST Engineering is the parent company of VT Halter Marine and VT Marine and reports their results within its marine sector results,

ST Engineering says the new contracts reinforce the positioning of the Group’s marine sector as a total solution provider for both naval and commercial ships.

In the U.S., the U.S.Navy’s Naval Sea Systems Command (NAVSEA) has awarded VT Halter Marine a contract, including options worth US$244 million (about S$331 million) for the detailed design and construction (DD&C) of two firm and up to four optional Auxiliary Personnel Lighter Small APL Class Berthing Barges (see earlier story). The anticipated delivery periods of the two firm vessels are in the second and third quarter of 2020, respectively. The options for the four vessels could be exercised for delivery during fiscal years 2019 to 2022.

In addition, Bouchard Transportation Co., Inc., a long-standing customer has awarded VT Halter Marine a US$30 million (S$40 million) newbuild contract for one firm Articulated Tug Barge (ATB) Tug and an option for a second vessel to be exercised within first quarter 2019 (see earlier story).

The ship and rig repair business continued its momentum of winning new projects, securing contracts worth about S$35 million for both commercial and naval projects. The company’s U.S. repair business, VT Marine, situated next to its Pascagoula, MS, shipbuilding yard has gained traction for new orders, as it continues to cross-sell its repair and maintenance services to an expanded pool of customers.

These contracts secured cover a wide-ranging scope – from repair of dredges, offshore vessels, and oil and chemical tankers, to high engineering content conversion of an anchor handling tug supply vessel to carry methanol instead of cement.