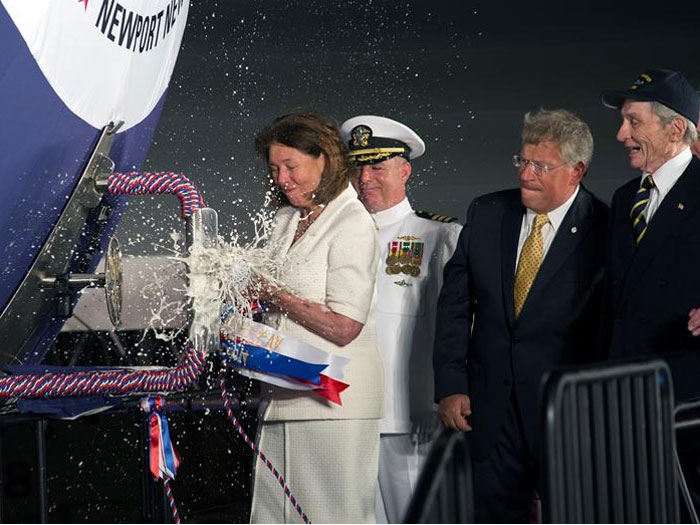 Jeanne Warner, ship's sponsor and wife of namesake John Warner, christens the 12th Virginia-class submarine, which will be delivered to the U.S. Navy next year

SEPTEMBER 9, 2014 — With her husband at one side and a massive submarine bow on the other, Jeanne Warner christened John Warner (SSN 785), the 12th Virginia-class submarine and the only one in the class to be named after a person.

The christening took place Saturday at Huntington Ingalls Industries’ Newport News Shipbuilding division during an evening ceremony that ended with fireworks and a laser light show.

As the ship’s sponsor, Jeanne Warner performed the traditional honor of smashing a bottle of American sparkling wine across the submarine’s bow before an audience of about 7,000 people.

Throughout construction, Jeanne Warner watched the submarine come together from the initial keel-laying to the christening.

“Each time I see her,” she said, “I am overwhelmed with pride and emotion and admiration because I know that the USS John Warner will, like her namesake, do what is best for America—protect us and our freedom for many years to come.”

John Warner, former U.S. Senator for Virginia and Secretary of the Navy, began his career as a Navy enlisted sailor during the final years of World War II. He went on to become a lieutenant in the U.S. Marine Corps during the Korean War before returning to Virginia to earn his law degree and begin his political career.

Introducing his wife as the sponsor, John Warner underscored the importance the submarine marks for the entire nation.

“We are here tonight to not just honor Jeanne and John Warner,” he said. “We’re honoring America—America’s strength, America’s commitment toward peace and stability in the world. That’s what this magnificent vessel hopefully will do for its entire 35 years.”

HII President and CEO Mike Petters emphasized the influence John Warner had on the Navy and the nation during his years of service.

“I would attest that we are better people and a better nation today, and for the generations yet to come, because of the service, commitment and dedication of Senator Warner,” Mr. Petters said. “So how fitting a tribute that this submarine, a ship that will take its place among the Navy’s elite silent service, will bear his name for the next 30 years as a provocative symbol of freedom and democracy, as a mighty shield against the arrows of an uncertain world, and importantly, as a second home to our nation’s finest men and women in uniform.”

During his keynote address, Secretary of the Navy Ray Mabus announced that SSN 785 will be homeported in Norfolk.

“The vessel that we christen today is the most advanced ship in the world, its technology unmatched,” he said. “American technological innovation and manufacturing skill have always been some of our most powerful advantages. They are represented in the John Warner by the more than 1,000 ship workers who have worked directly on her here and by thousands and thousands more across this country.”

Newport News Shipbuilding President Matt Mulherin celebrated the many Virginia shipbuilders who worked together to make the event possible.