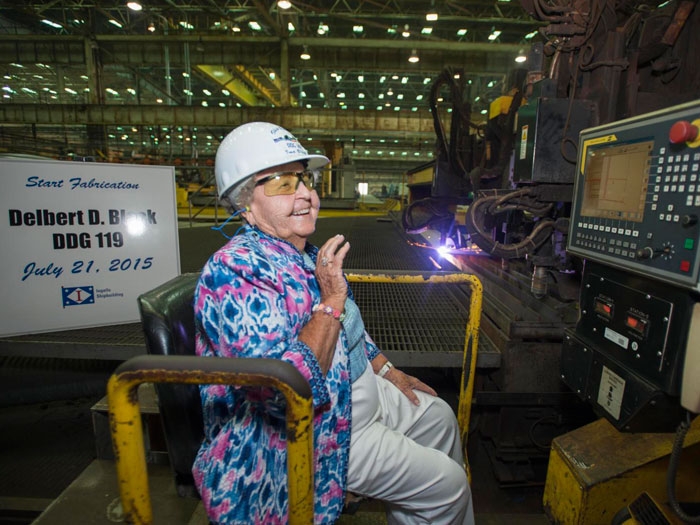 Ima Black reacts after starting a plasma cutter machine at Ingalls Shipbuilding, officially beginning construction of the Arleigh Burke-class destroyer Delbert D. Black (DDG 119), which is named in honor of her late husband

The ship is named in honor of Delbert D. Black, who served as a gunner’s mate in the U.S. Navy and was aboard the battleship USS Maryland during the attack on Pearl Harbor. Black served in three wars and was the first Master Chief Petty Officer of the Navy.

His widow, Ima, is the ship’s sponsor and participated in today’s ceremony by starting a plasma cutter to officially begin fabrication. She met Black after World War II, during which she served as a Navy WAVE (Women Accepted for Voluntary Emergency Service). She and Delbert were married 50 years until the time of his death in 2000.

“I want to thank all of the shipbuilders who are building this ship,” she said. “Today was very emotional for me. I’m happy they did name the ship for him and that they are building it for him, but it is sad that he was not here to receive these honors. He would be very pleased about it. I know the men and women who serve on this ship will be proud to have the name Delbert D. Black on their uniform.”

“Our shipbuilders are very excited about beginning the fabrication process of another DDG 51 destroyer, especially one named after the first Master Chief Petty Officer of the Navy,” said George Nungesser, Ingalls’ DDG 51 program manager. “Serial production provides the most effective and efficient way to build ships, and this is our fourth ship started in three

From this point on, shipbuilders will assemble the ship using modular construction, where pre-fabricated units are constructed separately and later lifted in place and integrated with other units.

“I am excited to see DDG 119 production starting off strong,” said Capt. Mark Vandroff, the Navy’s DDG 51 class program manager. “This ship will not only honor a great Navy leader, it will serve as a testament to all our current and future senior enlisted leaders of the value the Navy places on their service. My team was greatly honored to have Mrs. Black present at the start of fabrication and looks forward to her enthusiasm guiding us during the ship’s construction.”

To date, Ingalls has delivered 28 Arleigh Burke-class destroyers to the Navy.