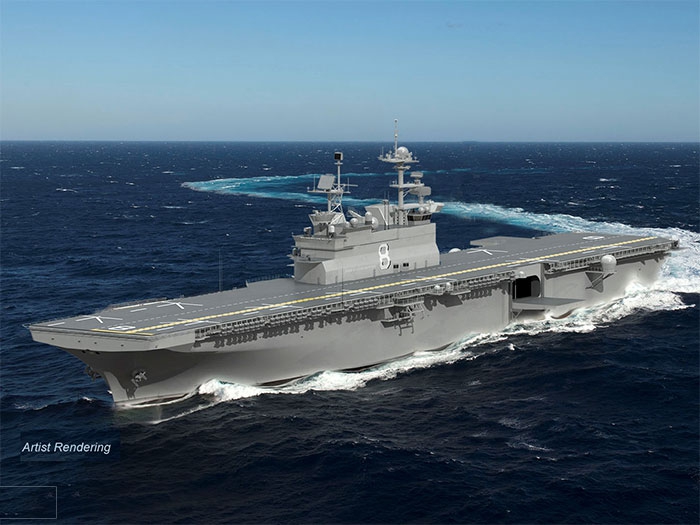 Huntington Ingalls Industries’ Ingalls Shipbuilding division has been selected to build the U.S. Navy’s next large-deck amphibious assault warship, LHA 8. The contract award includes options that, if exercised, would bring the cumulative value of the contract to $3.1 billion

This contract includes options, which, if exercised, would bring the cumulative value to $3,133,852,637.

General Dynamics, National Steel and Shipbuilding Co., San Diego, CA, is being awarded a fixed-price-incentive block buy contract for the detail design and construction of six T-AO 205 Class Fleet Replenishment Oilers (lead ship in fiscal 2016 and, if appropriated, one follow ship per year from fiscal 2018 to fiscal 2022).

This contract includes line items for five follow ships, and options for special studies, engineering and industrial services, provisioned items orders, LX(R) contract design support, cost reduction and implementation, other direct costs, and special incentives that, if funding is made available for all ships and all options are exercised/authorized, would bring the cumulative value of this contract to $3,156,828,444.

The T-AO 25 is the first ship of the next generation of T-AO (X) fleet replenishment oilers (T-AO 205). Secretary of the Navy Ray Mabus announced in January that the first ship will be named USNS John Lewis after the civil rights movement leader and current U.S. representative of Georgia’s 5th Congressional District.

That’s in line with an acquisition strategy described in a March  15, 2016 Congressional Research Service report:

On June 25, 2015, the Navy, as part of its acquisition strategy for TAO-205 program, issued a combined solicitation consisting of separate Requests for Proposals (RFPs) for the detailed design and construction (DD&C) of the first six TAO-205s, the detailed design and construction in FY2017 (and also procurement of long lead-time materials in FY2016) for an amphibious assault ship called LHA-8 that the Navy wants to procure in FY2017, and contract design support for the LX(R) program, a program to procure a new class of 11 amphibious ships.

The Navy limited bidding in this combined solicitation to two bidders—Ingalls Shipbuilding of Huntington Ingalls Industries (HII/Ingalls) and National Steel and Shipbuilding Company of General Dynamics (GD/NASSCO)—on the grounds that these are the only two shipbuilders that have the capability to build both TAO-205s and LHA-8.