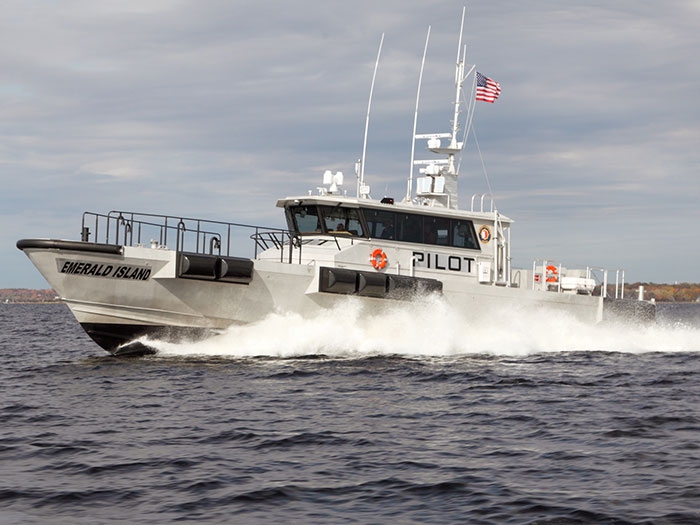 DECEMBER 6, 2018 — The Southwest Alaska Pilots Association has taken delivery of a new pilot boat from Gladding-Hearn Shipbuilding, Duclos Corporation. The Somerset, MA, shipyard delivered the vessel to Fort Lauderdale, where it was loaded on a ship bound for the West Coast.

With a length overall of 75.7’, beam of 20.6’ and draft of 3.11’, the all-aluminum pilot boat features the Ray Hunt-designed Deep V hull. It is powered by twin Cummins QSK38-M1, EPA Tier 3 diesel engines, each delivering 1,400 bhp at 1,800 rpm and connected to twin ZF-5000 gear =boxes. The launch is propelled by a pair of Hamilton HM651 water jets. Top speed is 29 knots. Humphree interceptors, with Active Ride Control and Automatic Trim Optimization, were installed at the transom. Two Northern Lights 30 kW generators produce electricity.

The wheelhouse, mounted to the flush deck amidships, features direct glaze-heated windows. It is outfitted with six Norsap shock-mitigating seats, a settee, berth, and a small galley behind the pilot seats. An eight-camera LCD CCTV system was installed in the wheelhouse, with four cameras mounted in the engine room and two cameras in the jet room. On deck are two cameras, one looking forward and one aft.

The forecastle includes two staterooms, head with a shower, dressing area and hanging lockers. Interior sound levels at full power are under 74 dBA.

A multi-zone hydronic system provides heating and air conditioning to the wheelhouse, forecastle and engine room. Two resistance heaters were installed in the jet room.

Outside of the wheelhouse, the roof, main deck, and all of the handrails are heated by a combination of electric resistance and hydronic heating systems. The vessel is outfitted with a handheld remote for use of the port and starboard hydraulic rescue davits.