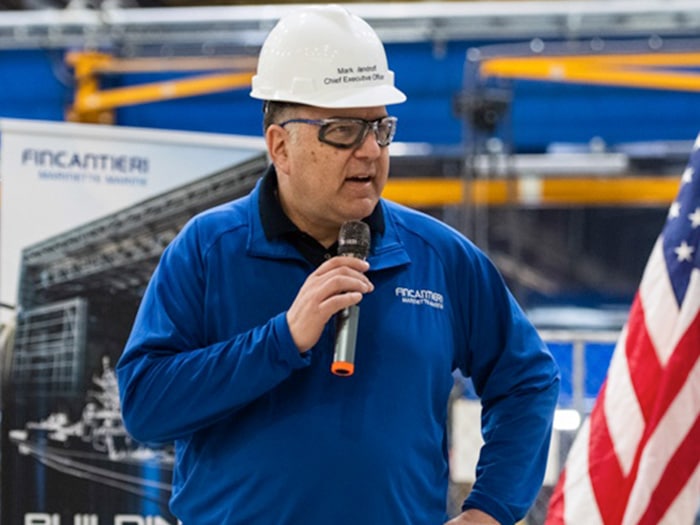 Leaders from Fincantieri Marinette Marine, the U.S. Navy, and Wisconsin-based Miron Construction dedicated a new facility at the Marinette, Wis., shipyard with a small ceremony on March 8.

Employees and guests gathered to open the shipyard’s newest building at the Marinette shipyard, Building 35, where giant plates of raw steel begin the journey to become a U.S. warship.

The 32,000-square-foot building is connected to a new panel line where steel is prepared, marked, cut, and welded on an automated assembly line, featuring state-of-the-art robotic welders.

Building 34 is where large steel plates for the Constellation-class frigate will be cut and welded.

Fincantieri received a contract worth a potential $5.5 billion to design and build the new frigate class in 2020 and is scheduled to begin construction of the first vessel this year. As employees continue training ahead of the start of construction, the new Building 34 facility will be increasingly.

The building and the panel line are part of a $300 million investment Fincantieri has recently put into its shipyards.

“It is important to remember that all of our construction and improvement projects are connected to a singular purpose: to be an efficient, modern shipyard that builds world-class frigates for the U.S. Navy,” said Dario Deste, President and CEO of Fincantieri Marine Group. “We continue to affirm our commitment to the Navy.”

The new facility and panel line offer significant improvements in the overall steel preparation, manufacturing, and staging processes that will be needed in construction of Constellation-class frigates. Fincantieri plans to build two ships per year after the ship design is stabilized. It is scheduled to deliver the lead ship in 2026 and the second vessel in 2027.

The Navy’s contract with Fincantieri has options for eight additional frigates which would be built in Wisconsin using Fincantieri’s system-of-shipyards, which also includes Fincantieri Bay Shipbuilding in Sturgeon Bay, as well as Fincantieri ACE Marine in Green Bay.