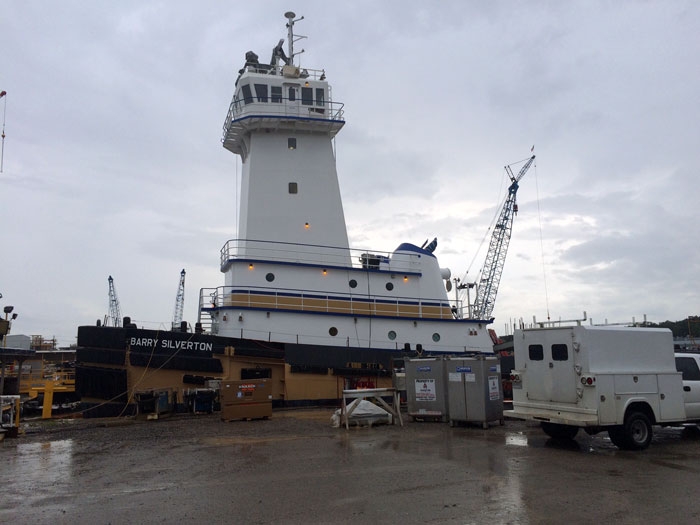 The M/V Barry Silverton, one of the tugs recently to Harley Marine Services by Conrad Shipyards

NOVEMBER 16, 2015—Like many shipbuilders along the U.S. Gulf of Mexico, Conrad Industries, Inc., Morgan City, LA, is feeling the pinch of the downturn in the oil patch and the drop in the price of oil. In announcing Conrad Industries, Inc.’s third quarter earnings for 2015, company President and CEO Johnny Conrad says, “Our results for the first nine months of 2015 reflect a continued challenging operating environment, with decreased demand and pricing pressure in both new construction and repair. The repair market continues to be soft, which we believe is due primarily to the decline in crude oil prices.” But a spate of new construction contracts in the fourth quarter of 2015 have bolstered the shipyard’s orderbook.

Strength in diversification
One of the strengths of Conrad Shipyards has always been its diversification. It builds tugs, towboats, ferries, ocean tank barges, LPG barges, deck barges, lift boats, and specialty barges. It’s broadened its portfolio even further with the expansion of its Deepwater South shipyard, where it can build large Articulated Tug Barge (ATB) units. While the company’s order backlog slipped to $91.1 million down from $135.0 million a year ago at the end of the Sept. 30—it landed $147.5 million in new contracts as of November 13 of this year. Among the new contracts are ATB units, including ones of 80,000 bbl capacity.

“We believe our capital improvement program at our Deepwater South yard has strengthened our ability to compete for these types of projects,” says Johnny Conrad. He says that the company will “continue to be responsive to the changing market conditions and look for ways to continue to enhance shareholder value.”