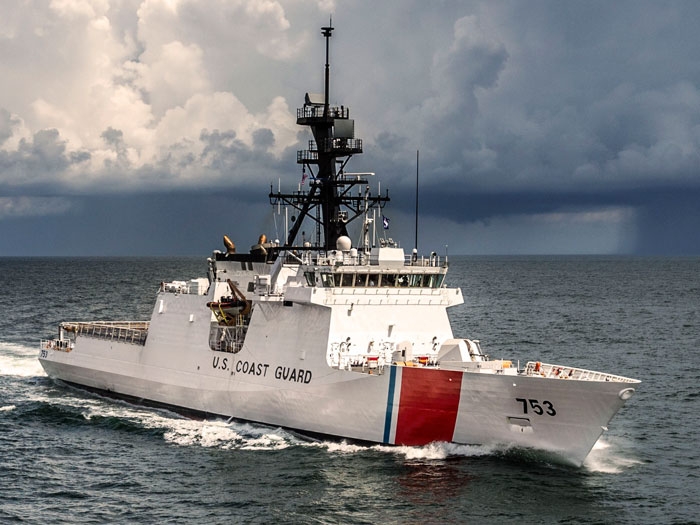 “Our performance on the National Security Cutter program is a blueprint for success in building high-quality, affordable ships,” said Ingalls Shipbuilding President Brian Cuccias. “We’ve significantly improved our learning, efficiency and affordability with each successive ship in the Legend class, and this one, our fourth, is the best yet. The benefits of serial ship production are clear, and with our hot production line we expect for this to continue. Congratulations to the shipbuilders and to Capt. Douglas Fears and the crew of Hamilton.”

One month ago, Ingalls’ test and trials team successfully completed acceptance trials on the ship by conducting extensive testing of the propulsion, anchor handling, steering and combat systems for the Board of Inspection and Survey. Today, the Coast Guard crew of Hamilton officially takes possession of the ship.

Ingalls has delivered three NSCs, and three more are currently under construction. A seventh NSC, Kimball (WMSL 756), is scheduled to begin construction in early 2015. Hamilton will sail away from Ingalls on Nov. 1 en route to Charleston.

Legend-class NSCs are the flagships of the Coast Guard’s cutter fleet. Designed to replace the 378-foot Hamilton-class High-Endurance Cutters that entered service during the 1960s, they are 418 feet long with a 54-foot beam and displace 4,500 tons with a full load. They have a top speed of 28 knots, a range of 12,000 miles, an endurance of 60 days and a crew of 120.

“I’d like to thank Huntington Ingalls Industries and the craftsmen here at Ingalls for building a fantastic ship,” said Rear Adm. Bruce D. Baffer, the Coast Guard’s assistant commandant for acquisition and chief acquisition officer. “I agree that this is the best National Security Cutter yet. It is an awesome ship, and it’s going to serve us for decades to come.”

The Legend-class NSC is the largest multipurpose cutter in the Coast Guard fleet and is replacing the 378-foot high endurance cutter, which has been in service since the 1960s. The NSC is 418 feet long and has a top speed of 28 knots and a range of 12,000 nautical miles. It is capable of performing 60- to 90-day patrols.

“After three years of fabrication and expert craftsmanship, Ingalls shipyard has delivered a great ship to the Coast Guard,” said Capt. Douglas Fears, the prospective commanding officer of Hamilton. “The Coast Guard’s Project Resident Office has fastidiously overseen the production of Hamilton through all key acquisition milestones. Finally, Hamilton’s crew has prepared over six months for this day, and we are both honored and humbled to be entrusted with the task of bringing this great ship to life and readying her for decades of service to our nation.”

The Hamilton is the sixth cutter in Coast Guard history named after Alexander Hamilton, who as the first Secretary of the Treasury prompted Congress to create the Revenue Marine, a precursor to the modern Coast Guard.

Hamilton will be the first of two NSCs homeported in Charleston, South Carolina. The first three NSCs – Coast Guard Cutters Bertholf, Waesche and Stratton – are performing operations from their Alameda, California, homeport. The fifth NSC, James, is scheduled to be delivered in the summer of 2015. The keel laying for the sixth, Munro, is scheduled for later this fall, with delivery scheduled for 2016. The seventh, Kimball, is under production, and long lead time materials for the eighth, Midgett, have been ordered.